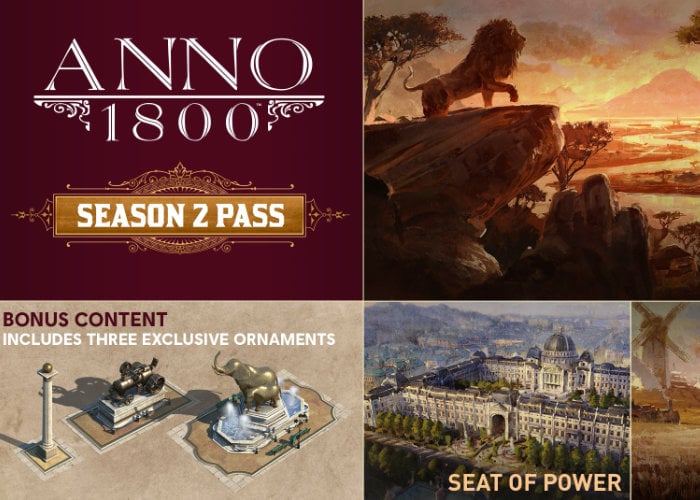 Ubisoft has this week announced the second DLC for the Anno 1800 city building simulation game. Later this month on March 24th 2020 the next DLC pack, Seat of Power will be made available enabling players to construct a magnificent palace fit for the ruler of an industrial empire. The DLC will be free for all players and as with Season 1, each of our three Season 2 DLCs will release alongside a free Game Update that will further improve and enhance the game for all Anno 1800 players, explains Ubisoft.

“Prior to the release of The Passage last December, we excitedly announced our plan to deliver even more Anno 1800 to our 1 million+ pioneers of industrial revolution throughout 2020. This presents a unique opportunity for the Anno team, as it means that Anno 1800 will be receiving more postlaunch support than any previous game in the series! In the past, development of content has ended a year or so after the release of an Anno game, with the team moving on to the next title. With Anno 1800, we are excited to have the chance to flesh out the world of the industrial revolution even further, with new systems, citizen tiers and yes, even a new continent. Enter stage right: The Anno 1800 Season 2 Pass, which will be adding three exciting new DLCs to the game this year!”

During the summer months of 2020 you can expect the second DLC for the game in the form of Bright Harvest followed by Land of Lions some time before the end of the year. In addition to these three DLCs, buyers of the Season 2 Pass will also receive three exclusive new ornaments when Seat of Power launches on March 24th— so enjoy your first look at the appropriately-themed ‘Palatial Column’, ‘Ploughman’s Glory’ and ‘Elephountain’.