If 19 year-old Eric Jacqmain could travel back in time with his invention, why, he can change history. Holy Cow, that’s a Hollywood movie right there! You read it here first, boys and girl—we’re gonna start on the script ASAP. Also, James Cameron is going to direct it. We insist. 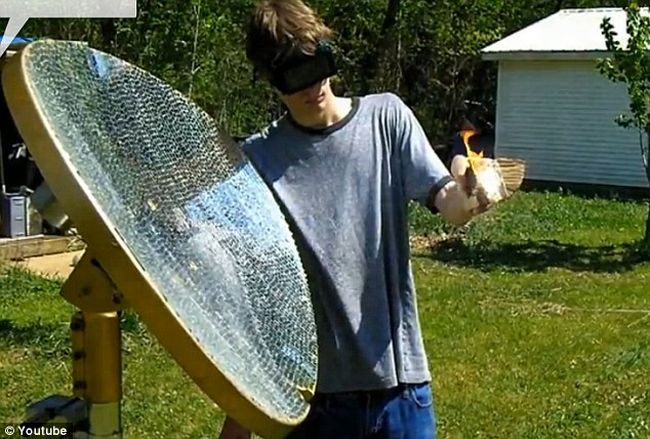 Ahem! Unfortunately our instant-ideas got the better of ourselves up there. Excuse us, kindly. Though Eric Jacqmain travelling through time will not happen anytime soon, his ingenious death ray might just make him viral celebrity.

The death ray is the glittering device pictured above. That’s a humble satellite dish covered in more than 5,000 mirrors and being field tested by Eric Jacqmain. Setting the DIY weapon at an angle, Jacqmain successfully burnt and melted a few hapless objects like a hunk of wood, a rock, and a paint can lid.

Kidding aside, so long as Jacqmain doesn’t set anyone’s house on fire, he deserves all the kudos he gets. Wunnerful, wunnerful. This is what American kids should be doing more often. Even if they fail at DIY backyard science projects, the self discovery and sense of wonderment is priceless.

We also have a good feeling if the machines take over shortly after the launch of the iPad 2, Eric Jacqmain is the one who’ll lead the resistance. This is another great idea for a movie.

Are you reading this James Cameron?