AMD has this week unveiled its plans for the development of their notebook and tablet chips within 2013. The announcemnt explains that AMD will be looking to update its series of E-series and C-series notebook chips later this year, together with its Z-series, low power chips for tablets devices.

The next-generation of AMD’s laptop processors named Brazos 2.0 hav been designed as low voltage chips for thin and light laptops which use 9 to 18 watts of power, in a similar vein to the curret Brazos 1.0 chips. However the new Brazos 2.0 will support AMD’s TurboCore technology, and sport a number of new features. 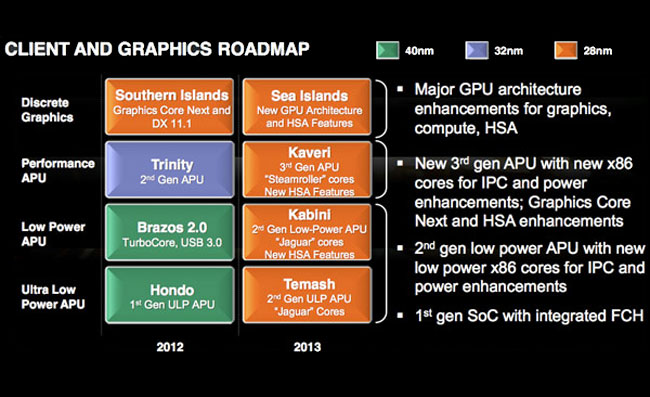 AMD went on to explain that next year it will be launching a new series of 28nm chips, with the 3W “Tamesh” processor line replacing Hondo, and “Kabini” replacing Brazos 2.0. The lower power Kabini processors chips will be launched with optins for either dual or quad-core versions.

During AMD’s announcement, which was timed to coincide with AMD’s annual financial analyst day, AMD also detialed its unique position between Chipzilla and makers of ARM chips.