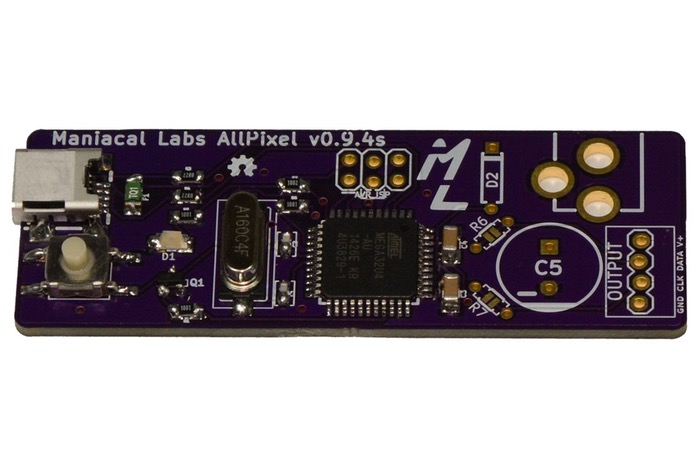 Maniacal Labs has this week launched a new Kickstarter campaign for their LED controller USB interface called AllPixel which has been designed to provide an easy way of controlling up to 680 pixels on any popular LED strip that is equipped with a USB port.

The AllPixel is a small board measuring 2.7 x 0.9 inches, that provides easy USB control of all the major programmable LED strips. It is compatible with Linux, Mac, and Windows platforms and can be controlled using a Raspberry Pi if desired. Watch the video after the jump to learn more.

“Working with addressable LED strips, we’ve found that the extra components required to communicate with and power them complicate designs and limit the options for how they can be used. Each chipset requires its own special protocol and supporting hardware components. This is where the AllPixel comes in. Think of it as a video card for your LED strips.

The AllPixel comes with an assortment of optional user-installed parts to allow for a variety of hook-up configurations. Very basic soldering skills are needed. NO SMD SOLDERING REQUIRED.”

The AllPixel project is currently over on the Kickstarter crowd funding website looking to raise $5,000 in pledges to make the jump from concept to production. So if you think AllPixel is something you could benefit from, visit the Kickstarter website now via the link below to make a pledge and help AllPixel become a reality.

The following chipsets are currently supported: