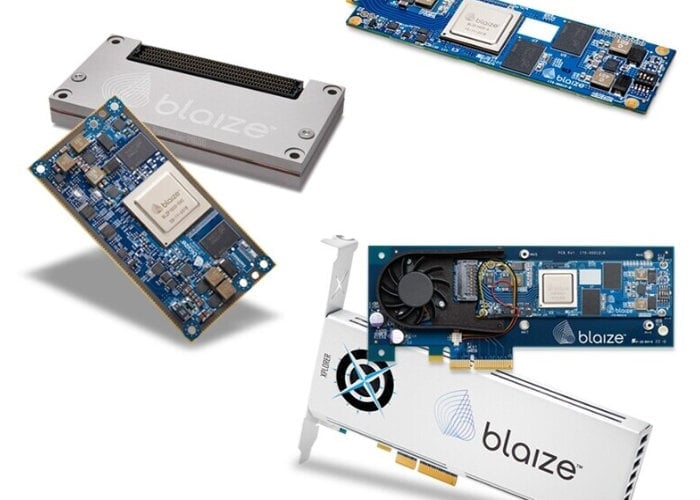 Blaize has this week announced the launch of new hardware and software specifically designed for AI Edge Computing applications. The Blaize Pathfinder and Xplorer platforms coupled with the Blaize AI Software Suite enable developers to “usher in a new era of more practical and commercially viable edge AI products across a wide range of edge use cases and industries”, says Blaize.

Blaize Pathfinder P1600 embedded SOM
The P1600 embedded Systems on Module (SOM) brings the programmability and efficiency benefits of the GSP to embedded edge AI applications deployed at the sensor edge, or on the network edge. No host processor is needed for the P1600, just plug it in and go.

Blaize Xplorer Accelerator Platforms
Blaize Xplorer platforms are built to accelerate AI applications at the edge of the enterprise via easy plug-in to the PCIe slot in a host server or appliance. The X1600E is a small form factor accelerator platform for small and power-constrained environments such as convenience stores or industrial sites. This is an accelerator form factor uniquely available from Blaize due to the efficiency of the GSP – and can be easily added to accelerate AI apps in industrial PCs or as a rack of cards in a small 1U server.

The X1600P is a standard PCIe-based accelerator in a half-height, half-width form factor. The X1600P can easily replace a power-hungry desktop GPU in edge servers and provide anywhere from 16-64TOPS of AI inference performance within a very low power envelope.

Blaize AI Software Suite
The Blaize AI software suite is built on open standards with ease of accessibility to liberate product developers from being locked to proprietary development environments. Comprised of the Picasso software development kit (SDK), and AI Studio, a completely code-free visual interface, the software suite offers tools for both traditional developers and non-coder domain experts. In addition, both tools sets utilize Blaize Netdeploy, a Blaize innovation with edge-aware algorithms to get the best accuracy and performance for edge deployments.