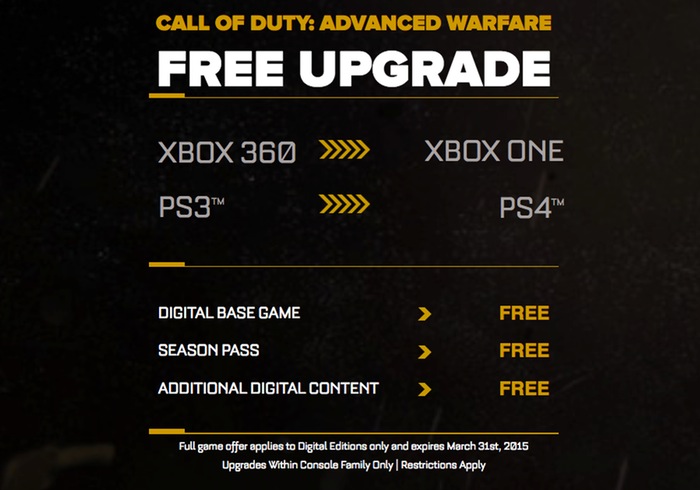 COD gamers are sure to be interested to learn that Activision has unveiled that any copies of the digital version of Call of Duty Advanced Warfare purchased for the older generation Xbox 360 or PlayStation 3 consoles.

Can be upgraded to the next-generation PlayStation 4 or Xbox One digital versions of the Call of Duty Advanced Warfare game for free, until March 31st, 2015.

Call of Duty Advanced Warfare will be officially launching on November 4th 2014 on the PlayStation 4 and Xbox One consoles, older PS3, Xbox 360 as well as PCs. Activision explains a little more :

“For full game free upgrades, this is available only to those who purchase a digital copy of Call of Duty: Advanced Warfare on Xbox 360 or PlayStation 3. Anyone who purchases a physical copy of the game is not eligible for this offer. All DLC purchased for in-game use, including Season Pass, upgrades for free for purchases of Call of Duty: Advanced Warfare in any format, digital or physical.

whether you participate in this program or not, all of your Multiplayer stats and gear are shared within a console family (Xbox 360 <-> Xbox One or PS3 <-> PS4) and will be waiting for you when you transition to next-gen.”

For more information on the new Call of Duty Advanced Warfare upgrade options and a brief FAQ, jump over to the Call of Duty website for details.