Cosmopolitan enclaves produce cosmopolitan amounts of distress. So rather than engage in anti-social behavior, citizens who commute regularly have the option to vent on punching bags. Actually we can’t say for sure how many Adidas sponsored punching bags are available throughout the Shanghai metro, but they are there ready to receive a few good kicks and (weak) joke punches–see below. 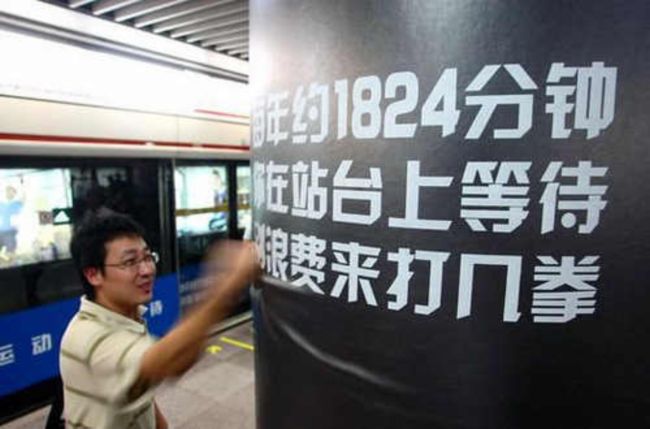 As an advertising coup, this new gimmick is pure genius. What better way for a major brand to engage its audience than letting them sink a few balled fists unto a post? (Don’t worry, it’s soft enough not to hurt.)

It’s also a potentially huge attraction for martial arts practitioners, who could unleash several minutes worth of fury before the train to work arrives. Let’s not hope the resulting action and subsequent popularity of these Adidas punching bags causes a few people to get hurt. See, a normal punching bag is ideally for a single person. Something this big could bring in several others who might actually elbow or punch each other by accident.

But at the end of the day, this is a very clever idea. Assuming a couple of angry folks beat it every day for a year, we wonder how long it take before a frequently pounded punching bag is reduced to shreds.