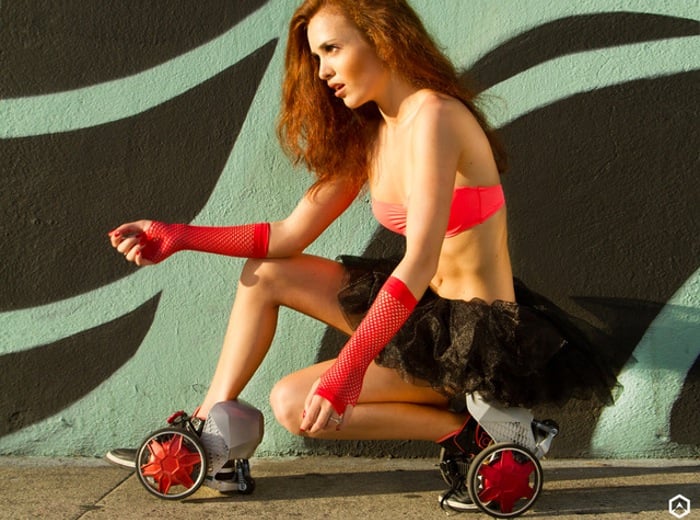 If you are looking for a new mode of transport you might be interested in these new Rocket Skates that have been designed by Peter Treadway and ACTON based in Los Angeles California.

The ACTON R Rocket Skates have been designed to provide users with on the world’s first smart wearable electric power skates that strap over your shoes. Watch the video after the jump to learn more about the Rocket Skates project and see it in action.

The Rocket Skates project is currently over on the Kickstarter crowd funding website looking to raise $50,000 to make the jump from concept to production and start a new global craze. Acton explains a little more about their concept.

“They are electric, motorized skates. Simply strap the RocketSkates™ over your shoes and off you go! Remote controllers? We don’t need remote controls! Your hands are now free for interpretive dance moves as you cruise about town- your feet control the skates.

Each skate has two hub motors controlled by an on-board microprocessor, and are powered by a lithium-ion battery pack. The skates communicate with each other so they maintain the same speed and behavior.

RocketSkates connect to smartphone via the ACTON App. You can monitor your skates and their performance. Route tracking, skate diagnosis, battery status, games, and social interactivity; the app keeps you in touch with other RocketSkaters.
A Software Developer Kit (SDK) will be available for developers interested in creating games and app features for RocketSkates. “

So if you think you would enjoy wearing a pair of electric powered Rocket Skates, visit the Kickstarter website now to make a pledge and help the electric Rocket Skates become a reality.