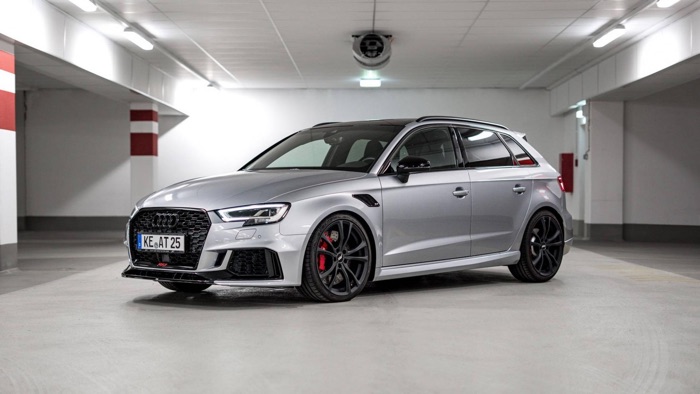 The standard Audi RS3 is now slouch, the car comes with 394 horsepower and now ABT have given the RS3 a little extra power and a range of other upgrades.

The ABT Tuned Audi RS3 comes with an impressive 470 horsepower, the car now comes with a top speed of 177 miles per hour, they have not revealed a 0 to 62 mph time as yet.

Just 20 years ago, the S3 made its debut as the most powerful compact Audi boasting 210 hp (154 kW). Coming in one level above this, the RS3 was introduced eight years ago. The current generation with Otto particulate filters delivers an enormous 400 hp (294 kW), almost twice as much power but the ‘driving pleasureometer’ has still to reach its peak. ABT Sportsline presents the ABT Power S performance package which provides the latest edition of the Audi RS3 with a whopping 470 hp (346 kW). Aficionados are aware that the “S” always refers to an additional mechanical component. Thus an intercooler is used in addition to the high-tech control unit ABT Engine Control (AEC). From the outset, this results not only in a significant increase in horsepower, but also an increase in torque, from 480 to 540 Nm. The maximum speed is also increased from 155 to 177 mph as part of the scope of delivery.

You can find out more details about the new ABT Tuned Audi RS3 over at ABT at the link below, as yet there are no details on pricing.