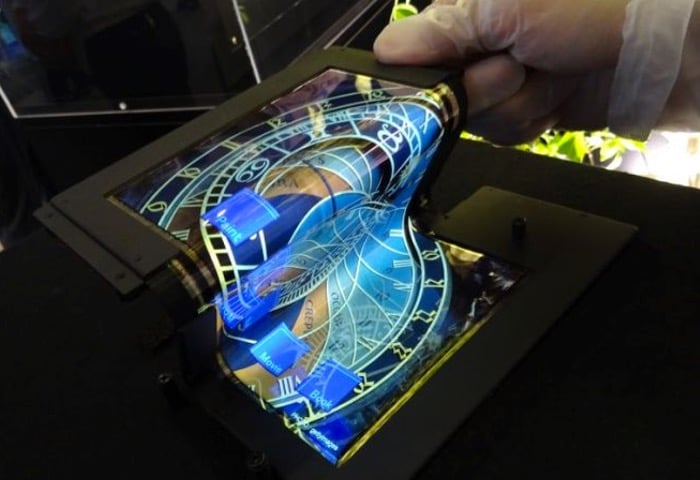 SEL has this week unveiled a new 8.7 inch flexible touch screen concept which takes the form of a 3-fold display building on the technology the company unveiled earlier this year when it revealed its smaller 5.9 inch 3-fold display at SID-2014.

As you can see in the photo above the flexible touch screen is capable of being distorted and then opened up to provide a full 8.7 inch touch screen OLED display providing users with a resolution of 1920 x 1080 pixels with 254ppi.

Unfortunately it is still going to be quite some time before consumers can get their hands on devices that are equipped with these new flexible touchscreen OLED displays. But the new prototype reveals that the technology is progressing forwards and as hardware manufacturers keep reducing the size of motherboards and batteries the flexible devices will become more viable. The OLED Display website explains :

SEL informed us that the book type OLED and three fold Display can be bent more than 100.000 times and the displays can be bent up to curvature radius of 2mm and 4mm. The thickness mass and aperture ratio of the display are 100μm or less, 6g and 46%, respectively”

For more information on the new flexible touch screen display jump over to the OLED Display website for details via the link below. For more details on Raspberry Pi displays and HATS jump over to our essential guide.