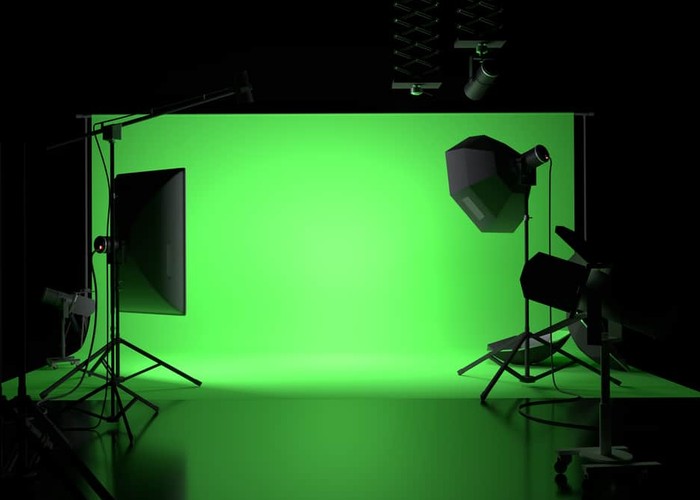 If you would like to create amazing effects in your next video or photo, a green screen background can help remove your current background and replace it with something more creative and visually appealing. Green screens provide an easy way to use the chroma key special effects technique widely used by professionals worldwide when creating YouTube videos, Hollywood blockbuster films, and photographs, replacing the background with a specific color, images, or scene which can easily be swapped for something more exciting at the press of a button. Enabling you to transport your actor to a far-off distant planet or jungle without having to leave your studio.

In this quick article, we will look at 5 popular green screen backgrounds that make it easy to replace the green background they create with another image or video during postproduction, using a wide range of different software and applications available both free and via monthly subscriptions or one-off payments.

Green screens have been used for many years to recreate imaginary worlds and create visual effects to help transport moviegoers to imaginary lands and planets in far-off galaxies with a minimum of cost and resources for the production crew. More recently green screen backgrounds have been used to create optical illusions for YouTube videos and allow you to stream content from different locations at the click of a button. The recent Disney Mandalorian series took this to a new level using 360° green screen theatres to considerably reduce production costs and increase the immersion and effects capable of being created using green screen technology.

When purchasing a green background, you will need to take into consideration several factors, including the size you require to cover the area behind you or your subject. As well as consider accessories to hang the screen, either from the ceiling or using tripods and horizontal bars. As well as the color of the screen, Green is the predominant color but other colors are also available depending on your needs and come in blue, white, grey, black, and more for different photographic situations.

For instance, blue screens are also a popular choice and are normally used for night videos or when there are other green objects present in the video or photograph, as anything else green will also be replaced by your background. So remember wearing a green T-shirt will make you invisible just as if you were wearing the invisible cloak from Harry Potter. This invisible effect was created using a green piece of material that actor Daniel Radcliffe would wear to make him appear as if he was disappearing in front of your eyes.

Another good reason for using a green color background is that most modern cameras have twice as many green sensors as red or blue, so they are much more sensitive. Requires less light to carry off the special effects and remove the background during postproduction. Thanks to these extra green sensors within the camera sensor, images and video have less noise because of the higher sensitivity.

Most green screen backgrounds currently available measure approximately 2.7m x 4.75m or 9ft x 15ft, giving you some idea of just how big the screens are in the background space you will need to transform. If you are looking to set up a green screen studio in your home or bedroom, make sure you have ample space to accommodate and hang the screen before purchase. You can also join several large green screens together to create a huge film set if required, but remember to make sure there are no shadows where the screens connect.

If you are getting started with your first green screen background and would like to try out a few special effects, it is also worth paying attention to your lighting. Make sure your lighting is as uniform as possible and there are no shadows, wrinkles, or dark spots on the screen when you are recording. These imperfections in the background will make it harder to remove the green color and could show up as strange textures in your final video or photograph. To mitigate this you can use two spotlights placed on either side of the green screen at 45° angles. Further lighting can illuminate your subject separately. Also, make sure your subject is standing approximately 2m or 6ft away from the green screen to help reduce the possibility of them casting any shadows on the screen.

Other things to consider when using a green screen background as mentioned before are the clothing colors of your actors or presenter. Make sure no one is wearing green accessories or articles of clothing that could interfere with the postproduction and make them look invisible. It is also advisable to stay away from materials that reflect light, such as glass and metal, as well as extremely light colors such as white when recording.

How to use a green screen correctly

Watch this video on YouTube.
Filed Under: Camera News, Guides