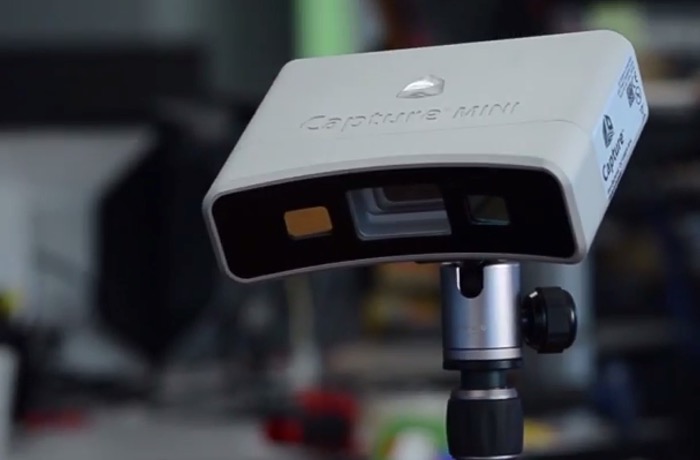 3D Systems has this seek unveiled its new Capture Mini 3D scanner and cloud 3D printing software that the company has created to make the process of printing real life object after converting them to digital files as easy as possible.

The new Capture Mini scanner is a small, highly accurate blue LED structured-light scanner that has been combined with industry-leading Geomagic software products, says 3D Systems. Watch the video after the jump to learn more about the Capture Mini scanner and see it in action.

The Capture 3D scanner weigh albs and has an accuracy as precise as .034 mm (.0013 in.), capturing 1 million points per scan in .3 seconds.  The Capture Mini’s field of view is 88 x 87 mm, suiting it for smaller objects that can fit in the palm of a hand. Vice President and General Manager of Geomagic Solutions at 3D Systems, Calvin Hur, described the device as :

“Capture Mini gives our customers yet another option to begin their journey through the digital thread. This is an easy, highly precise way to begin bringing the real world into digital design packages, then creating objects, 3D printing them, and scanning them for fidelity to CAD designs. It opens the door for creating 3D content of all kinds.”

“Engineered to be powerful yet user friendly, Capture Mini is highly versatile with a number of options to complete your desktop scanning setup. The Capture Mini can be combined with the Capture Pro Pack, which includes a powered rotary table for automated 360-degree scanning and a hard case for easy transport. In addition, Capture Mini is compatible with the Geomagic Capture multi-scanner setup, allowing for fast, coordinated scanning with multiple units. User experience becomes even easier with the Capture Mini’s simple cable configuration and quick setup.”

For more information on the new Capture Mini 3D scanner jump over to the 3D Systems website for details and more specifications. Unfortunately no information on pricing or worldwide availability has been released as yet by 3D Systems.