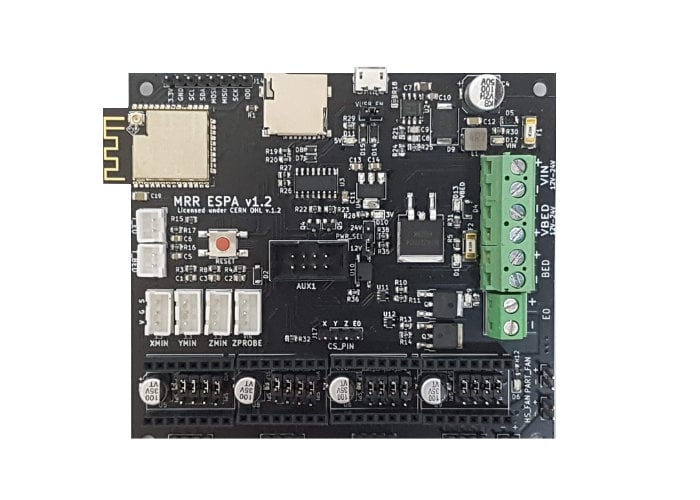 Makers, hobbyists and developers looking to build their very own 3D printer may be interested in the MRR ESPA a 32-bit 3D printer control board with wireless connectivity. Based on the popular ESP32 microcontroller The board is capable of controlling up to four stepper drivers, a heated bed, single hot end, and a controllable part cooling fan. Check out the overview video below to learn more about the 3D printer controller created by Maple Rain Research based in Yokohama, Japan.

The native wireless support sets the MRR ESPA apart from other 3D printer control boards currently available. Offering support for 802.11 b/g/n protocols, and a custom fork of Marlin firmware can be used on the board to allow the board to be controlled via a web browser. Its development team explain a little more about its wireless connectivity and features.

“This removes the need for the traditional LCD controllers that most other boards use. There is also no need to connect a Raspberry Pi in order to control the printer via a web interface. The web interface is the popular ESP3D webUI, which runs natively on the custom Marlin fork. The printer can then be controlled via any web browser, be it a PC, smart phone, or tablet. For example, you can slice your 3D model using a slicing software on your PC, then use your PC’s web browser to connect to the printer, send the sliced GCODE file to the printer via Wi-Fi. Then, using the same web browser, you can tell the printer to start printing away.”

The 3D printer control board is now available to back via Kickstarter from roughly £40 and will be delivered worldwide during December 2019 if the campaign is successful.