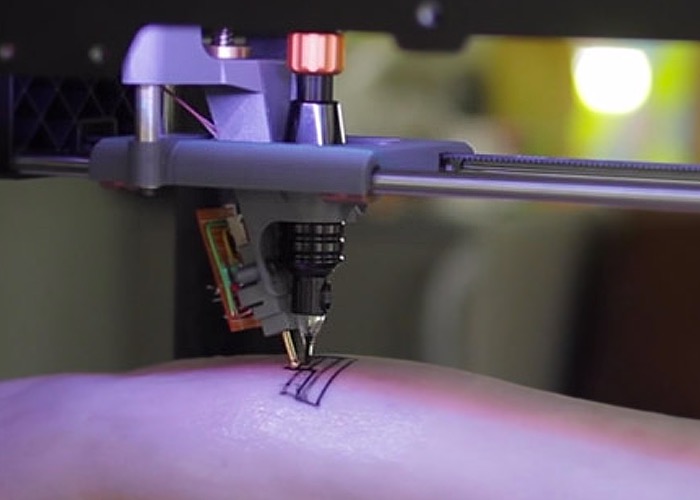 We have featured many 3D printers here on Geeky Gadgets over the past few years, but now Paris design studio Appropriate Audiences has modified one and transformed it into an automated tattooing machine.

The new 3D printer hacked tattooing machine named the Tatoué is capable of painting indelible artworks on human skin and is capable of puncturing skin up to 150 times per second. Check it out in the video below to learn more and see it in action.

The French hackers have replaced the 3D printing head of a MakerBot 3D printer that would normally extrude molten plastic with a needle and fitted it with a sensor that reads the surface of the subjects skin. Allowing the system to automatically change to variances in skin texture and the dimensions of a person’s arm. Its creators explain :

“We use a three axis machine, which we have deconstructed,”-“Making the machine more accessible is a challenge. And there are many possible future applications – in medicine or in fashion – but our priority is a third version of the machine, which will be able to tattoo any part of the body using a specific architecture. We are currently working on this.”

“From the onset of the project we have been exchanging with tattoo artists and now would like to deepen our relationships with them, so as to better adapt the machine to their different styles and practices,”

The team of students responsible for creating the tattooing machine are now entering full time development of the system to make it commercially viable.For more information on the innovative tattooing machine created from a Makerbot 3D printer jump over to the Dezeen website for details via the link below.