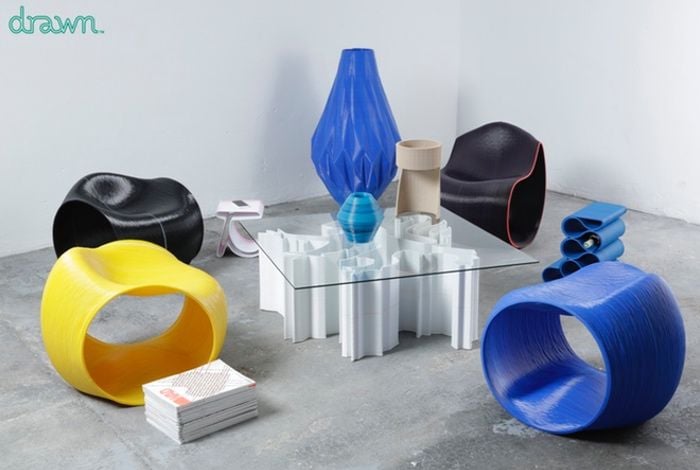 Drawn, a French startup has taken to Kickstarter this month to launching its very first range of 3D printed decorative objects and designer furniture created with designs based on Galatea’s 3D printing process.

Galatea is a huge 3D printer made from a robotic arm constructed and designed by Sylvain Charpiot who has adapted an industrial robot that was found in a dismantling automobile factory. Watch the video below to see the Galatea 3D printer in action.

Drawn edits some designers based on its production process. But thanks to unique Galatea’s process, drawn can offer customization for each piece! Therefore, clients get involved in the process from the creation of the piece to the production as a show. For instance, a chair with original shapes will only take 2 hours to be printed.

Galatea 3D prints objects layer by layer. She extrudes different shades of plastic material, specially the one used to make the Lego bricks, by heating it up to 230 °C and pushing it through its nozzle. The resulting look is instantly recognizable.

The designer furniture created using Galatea is now available to pledge for over on the Kickstarter crowdfunding website with table lamps priced at €75 and chairs priced at €160. Follow the link below to learn more and see the full range available.