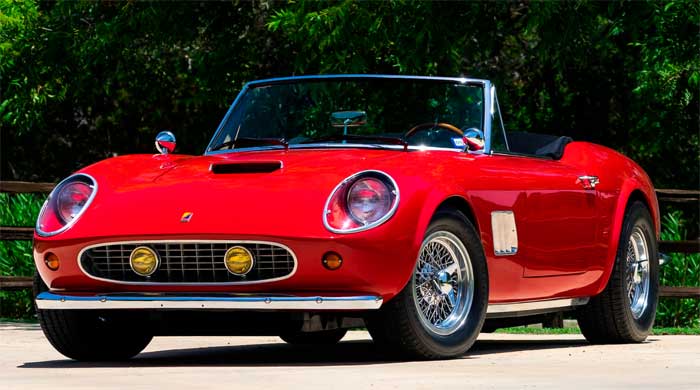 Anyone who is a fan of ’80s movies or who was around in the ’80s will be familiar with the classic Ferris Bueller’s Day Off. One of the key bits in that movie was the red car that Ferris’ pal Cameron showed off to his friends. Cameron said that the car was a 1961 Ferrari 250 GT California and less than 100 were made.

The car in the film was not a real Ferrari, none of the three movie cars were real Ferrari’s. What they were are 1985 Modena GT Spyder California reproductions. One of the three cars used in the movie is going up for auction. It is GT0003 serial number and comes with a certificate of authenticity and movie memorabilia.

The car has a 5.0L V8 with aluminum heads and roller rockers, 4 Weber downdraft carbs, 5-speed transmission, and coil over shocks. The car even has AC for those short runs to the store in hot weather. The car is fresh off none months of updates by the owner Neil Glassmoyer. The car will be auctioned by Mecum in Monterey in August.