In a rare chain of events that would make a decent Hollywood tear-jerker, a 14 year old lad from Berkshire got a new arm from a Scottish robotics company courtesy of Mercedes. That’s a lot of parties involved if you ask us, but the backstory is rather complicated.

See, dear Matthew is missing a limb. It wasn’t cut off in a lightsaber duel or the tragic result of an accident. For Matthew it was congenital. He’s been making do with a prosthetic hand for ages until he wrote a cheeky letter to the Mercedes F1 team GP Petronas. 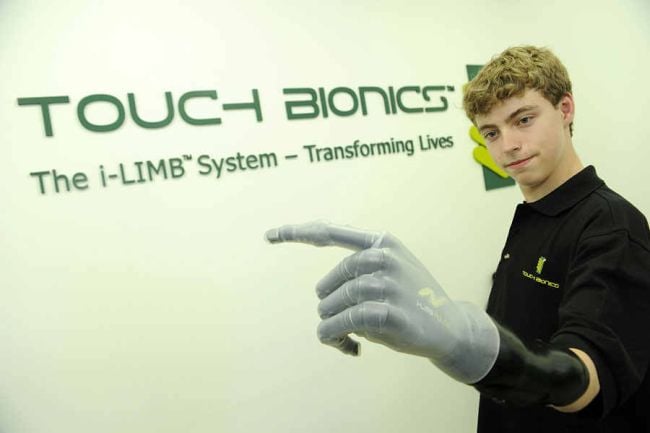 What happened next was Mercedes reached out to the needy teenager and commissioned Scottish based robotics geniuses Touch Bionics to create the iLimb Pulse. Now fitted to Matthew’s arm, the iLimb is a very impressive piece of articulated hardware; the moving fingers plus Bluetooth capability puts it in a league of its own. There’s no human-tissue-over-a-metallic-exoskeleton claptrap though, unlike a T800, Matthew’s new hand is silicone and plastic.

Since his arm got attached, Matthew has been looking forward to school–he attends Reading–and other activities. These include karate, sports, and a burning desire to become an engineer for F1. Oh yes, during a rare factory visit just for Matthew, Mercedes claimed they weren’t paying for the arm and would fork the bill to sponsors. Oh cripes man, that’s just too suspicious for comfort. Why is a photogenic picture-perfect teenage lad with a sob story in cahoots with a major automaker? Anyone want to cry out ‘PR stunt’! Anyway, good luck to Matthew and his newfound hand.