Zynga has announced that it will be launching a new RewardVille service, no its not another game but a rewards program that rewards Zynga game players with zPoints and zCoins which can be used to earn rewards.

Each time you participates in a Zynga game Zynga points will be awarded to you and increase your Zynga Level, at the increase of each level Zynga coins are then issued which can then be used to purchase exclusive in-game items via Rewardville. 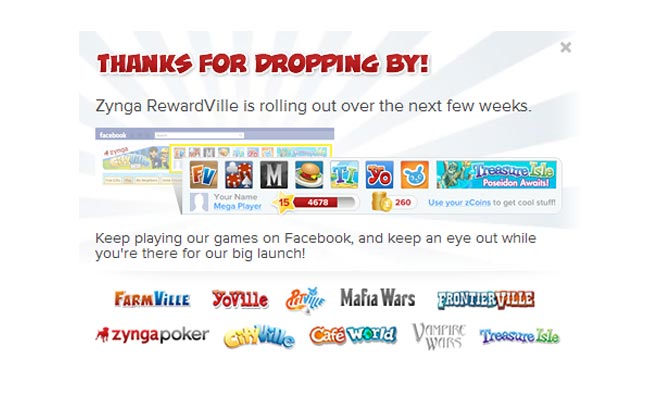 It was noticed earlier this month that Zynga may hace possibly purchased the RewardVille.com from its previous owner, for $4,500 blogger Elliot J. Silver. The domain Rewardville.com now resolves to a website that announces the rewards program in beta, exactly the same if you visit rewards.zynga.com

From first impressions it seems that players will be able to earn a maximum of 80 points per game per day, with a maximum of 300 points across the entire Zynga network each day. Happy gaming.