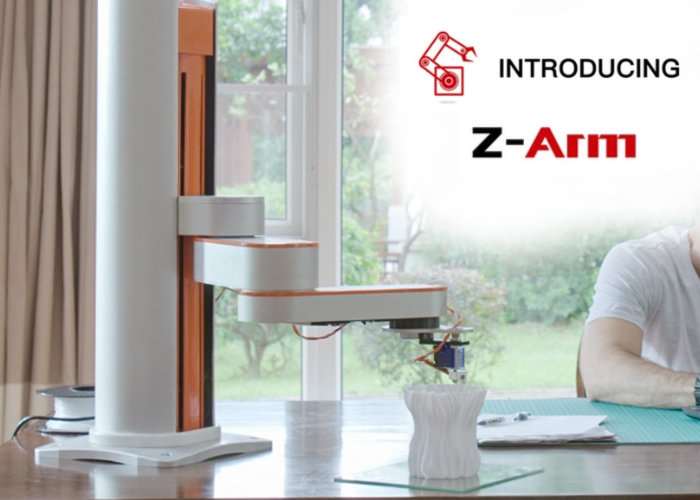 A new multipurpose robotic arm has been created by a team of developers at HitBot based in Shenzhen, China called the Z-Arm, which is capable of 3D printing, laser engraving, picking/placing and more.

Watch the demonstration video below to learn more about the Z-Arm all metal robotic arm which is taken to Kickstarter and has already raised over $100,000.

Z-Arm is available to early bird backers for $1199 with shipping expected to take place during April 2018. Its development team explain more.

Robotic arms no longer belong only to Sci-Fi movies or automotive factories. In fact, they have become part of daily life for makers, hobbyists and businesses.  However until now, collaborative robotic arms with industrial level accuracy and professional quality have been prohibitively expensive. That’s why we want to make a difference by introducing Z-Arm!

Z-Arm is a desktop workstation robotic arm with incredible repeatable accuracy, durability and built-in safety features for makers, business owners, or anyone with an interest in robotics. It is incredibly versatile and can be equipped to deal with a nearly unlimited number of tasks, including cutting, 3D printing, soldering, parts assembly and more. With interchangeable heads, you can reply on Z-Arm for many tasks. Here are a few examples of how Z-Arm can help you to build and create.

Jump over to the official Kickstarter campaign page for more details, full specifications and a list of all available pledges.