Sure, this might be a gadget blog, but the degree of sophistication some toys have these days can still surprise us. Seen below is the Xploderz X Stormer 1000, a particularly non-lethal water gun that fires solidified H2O projectiles at a target. It’s a clever hybrid of paint ball technology and traditional water guns, meaning you can still manage to get people messy during a particularly vicious exchange of gleeful fire. 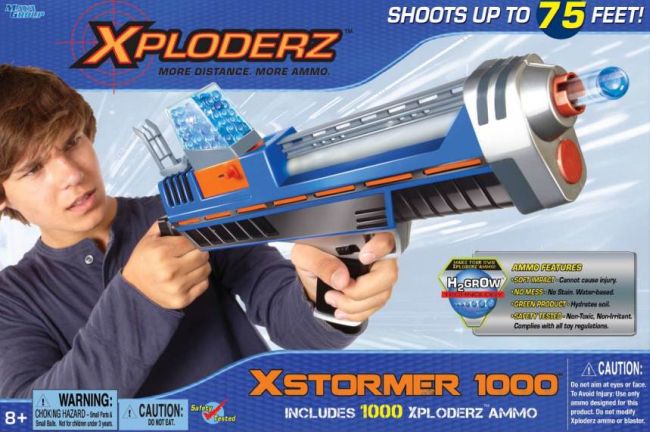 True to its genre, the Xploderz family of weapons is modular and come in various sizes. So as to curb parental concern, the Xploderz cartridges are completely non toxic and disposable. As a harmless tool for summertime outdoor excitement, the Exploderz series come highly recommended to gun nuts who don’t mind a little watered down exchanges.

Engineered to satisfy the tastes of weekend warriors, the Exploderz series features the X Stormer assault rifle, the pistolized X Blaster 200, and the accuracy weapon XRanger 2000 that even has a bipod underneath its muzzle. A standard Xploderz weapon comes with 400 rounds of ammo, which is more than enough to wreak enough havoc and mayhem in a backyard shootout.

The Xploderz series is loaded via a cartridge attached on the upper receiver. Extra reloads are bough separetly form the Xploderz website or at retail outlets.