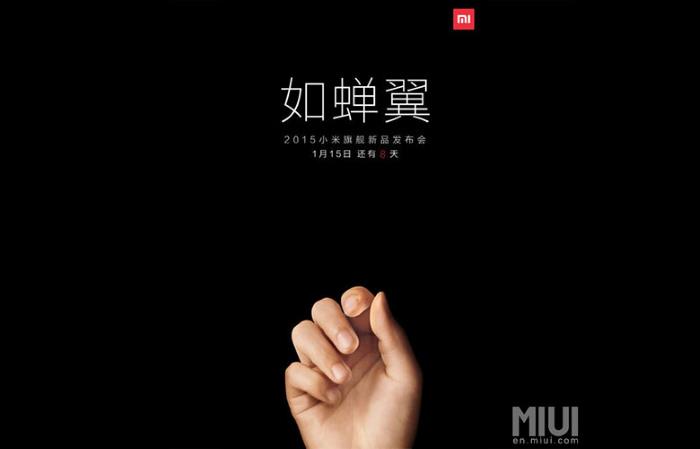 Xiaomi has scheduled an event on January 15th at the National Conference Center in Beijing where the Chinese company is expected to announce a new flagship device.

There’s no word about the device which will be showcased at the event, but Xiaomi has posted a teaser hinting at an extremely thin design.

As you can see from the image above, the finger placement hints at an extremely thin design, and is also referred to be as “thin as cicada’s wings.” This is merely an over exaggeration and we’re hoping to find out more about the alleged device in the coming days.

There are no details available about the specifications of the alleged device, except that there’s going to be a 2,000 mAh battery. It’s a little less, but the companies have to let go of some things to make the phone a little thin. For now, we can just speculate, and wait for the Chinese OEM to make things official.

Xiaomi is one of the most successful smartphone manufacturers of 2014, rising to the top five largest smartphone vendors. It would be interesting to see what the company has to offer soon.