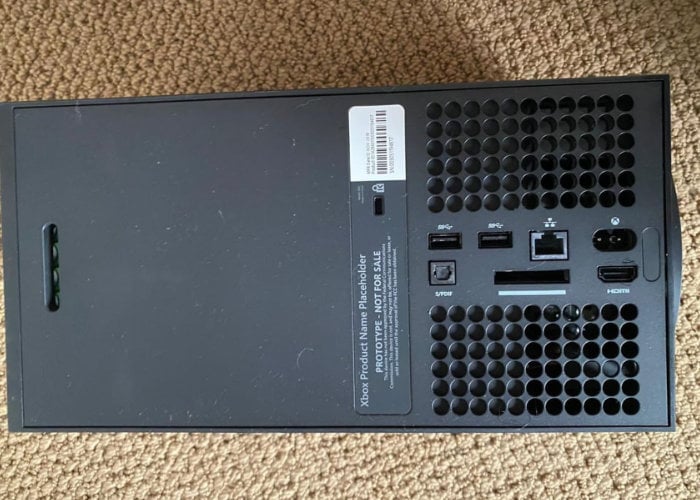 It seems that a possible leaked image could reveal the connections on the rear of the new Microsoft Xbox Series X games console, which is being prepared as a replacement to the older Xbox One. As you can see from the image above the Xbox Series X sports two USB-A ports on the back, one on the front, optical audio port, Ethernet, power connection and a single HDMI-out.

The image first appeared on Twitter and has been apparently corroborated as authentic by Thurrott’s Brad Sams. The neat photograph shows the new console marked with a serial number and labeled as “Xbox Product Name Placeholder.” Microsoft is expected to launch the new Xbox Series X games console later this year in time for the holiday season and before 2021.

“The images were posted by Curry Panda on Neogaf and the images are authentic of the hardware, meaning this is not a fancy 3D printed model. And as I reported, the back of the hardware contains an optical audio port, two USB A ports, ethernet, power and a single HDMI port. The holes on the side of the ports are for venting and that large rectangle port in the middle is for diagnostic reporting. I don’t expect that port to be on the final hardware and as always, these ports could change. The hole at the top of the series X does make it look like that back is removable but I would expect that to be since this is a pre-production unit and may need to be serviced to debug or update the hardware as they revise the final product.” reports Brad Sams

Unfortunately, no information on pricing has been released or leaked as yet for the Xbox Series X, but as soon as information comes to light, we will keep you updated as always.