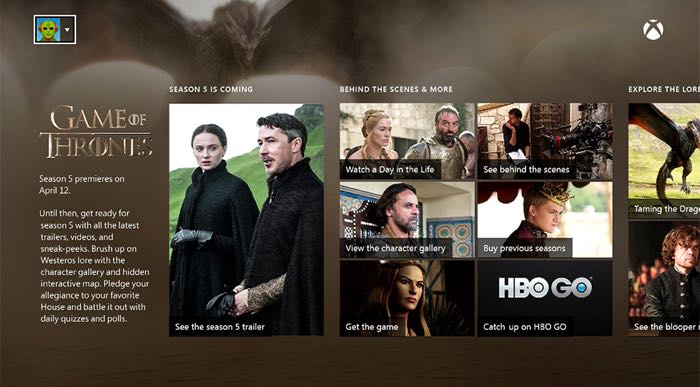 Microsoft has announced that they have teamed up with HBO and are offering the Game of Thrones Season 5 premier available for free on their Xbox One and Xbox 260 consoles.

The show will be available to Xbox Live members for free on both of Microsoft’s Xbox consoles until the 16th of April.

Are you an Xbox Live member impatiently looking for updates from the Seven Kingdoms? Wait no more. Our ravens are bringing some exciting news – starting today, all Xbox Live members can watch the “Game of Thrones” Season 5 premiere for free through April 16.

And if that’s not enough to get you ready for Season 5, HBO and Xbox have joined forces to bring you a variety of Game of Thrones content in a special experience available this week when you sign into Xbox Live. Preview Season 5 with trailers, pledge your allegiance to a house, go behind the scenes with on-set tours, and test your Westeros knowledge with trivia questions asked by Game of Thrones cast members.

You can find out more details about Game of Thrones Season 5 on the Xbox and Xbox One over at Microsoft’s website at the link below.