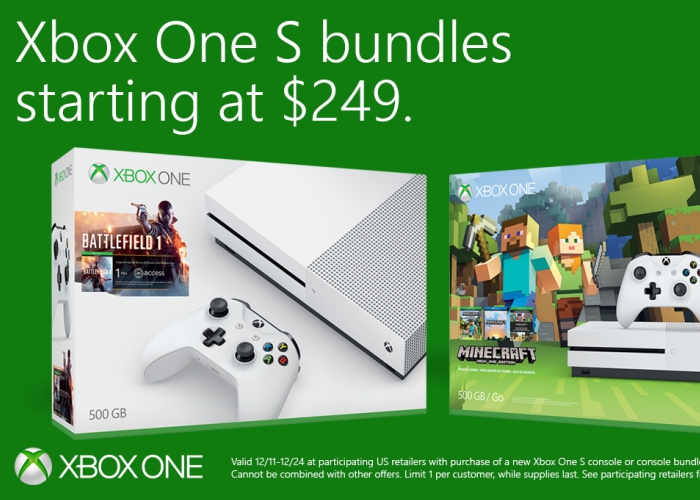 Not to be outdone by Sony, Microsoft has today announced via the Major Nelson website that its Xbox One S bundles now start from $249 and allowing you to receive either Battlefield 1 and a 500 GB hard drive or explore the world of Minecraft.

The newly priced bundles are now available to pick up from both online and high street retailers such as Amazon, Target, GameStop, Best Buy, Walmart.com and of course the official Microsoft Store.

The Major Nelson website explains more about the Christmas promotion which is now underway until Saturday, December 24th.

Start your holiday on the right foot with some savings from Xbox! From Sunday, Dec. 11 through Saturday, Dec. 24, all Xbox One and Xbox One S consoles will be $50 off at participating retailers in the U.S.

Only on Xbox One S can you enjoy 4K Ultra HD Blu-ray, 4K video streaming and High Dynamic Range for $299. With the fastest, most reliable gaming network with Xbox Live, play over 100 award-winning exclusive games and enjoy a growing library of more than 280 Xbox 360 games playable through Backward Compatibility on Xbox One. You can also stream your favorite movies and shows on Netflix and Hulu in stunning 4K Ultra HD. There’s no better time to buy an Xbox One S, the ultimate games and 4K entertainment system.