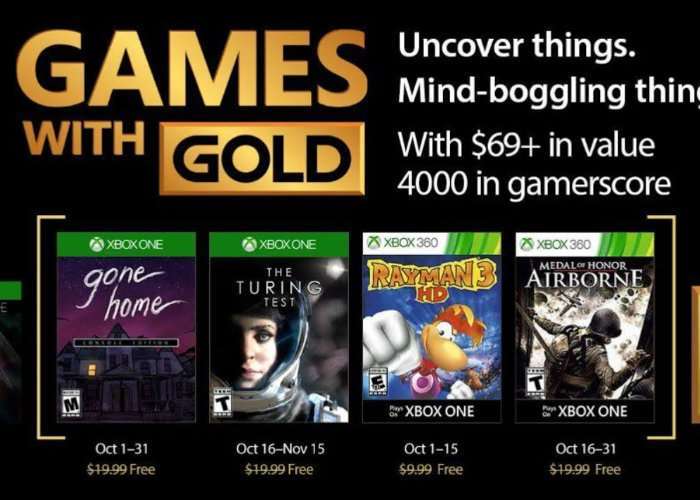 October’s Xbox Games with Gold are now available to download for those that enjoy a subscription to the Microsoft service which allows gamers to enjoy free downloads of games for the Xbox 360 and Xbox One consoles.

This month Xbox One games include Gone Home and The Turing Test, while for the Xbox 360 Rayman 3 HD and Medal of Honor: Airborne, are being made available. Both games also support Xbox backward compatibility allowing owners of Xbox One games to enjoy four games.

– Gone Home: Console Edition – Interactive storytelling is at the heart of this award-winning, genre-defining game. Imagine coming home after a year abroad to find none of your family home. As you move through the house, interact with keepsakes and photographs and other clues to uncover what happened. From the creators of the recently-released Tacoma on Xbox One.

– The Turing Test – Engage your logic skills for this first-person puzzler set on Jupiter’s moon, Europa. In The Turning Test, use your Energy Manipulation Tool (EMT) to transfer power in and out of many machines and giant structures that can help you as the narrative-focused story evolves.

– Rayman 3 HD – The charming 3D platformer returns in high-def! Jump, fly, and fight your way through the fantastic world of Rayman 3 HD and take on an army of Hoodlums led by the Black Lum, Andre. With remastered visuals and updated audio, this is the definitive version of Rayman 3.

– Medal of Honor: Airborne – How you decide to approach Medal of Honor: Airborne starts the moment you jump out of the plane. Control your drop as you navigate to a desired insertion point to put yourself in the thick of the fight. Then navigate through the war-torn villages and towns to gain an advantage over your enemies on rooftops, balconies and other ruins. With customizable weapons and free-roaming objectives, and local and online co-op, this is a fantastic shooter to add to your library.