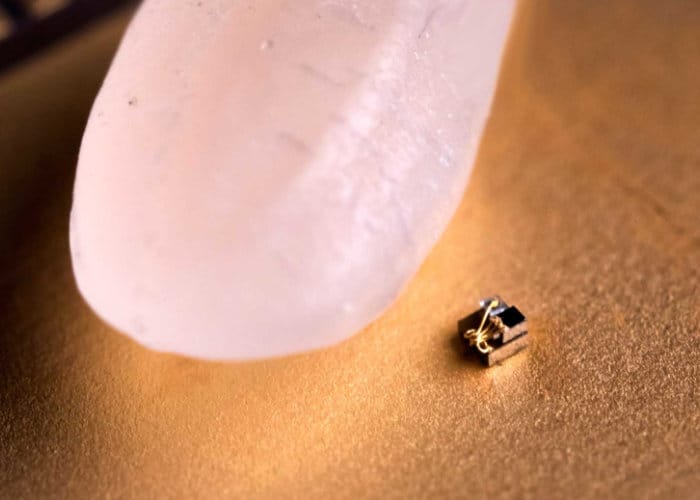 The world’s smallest computer pictured above next to a grain of rice. Could provide a stepping stone for changes to the way we monitor health thanks to researchers at the University of Michigan who have created a temperature sensing computer measuring just 0.04 cubic millimeters.

The tiny computer has set an unofficial record beating the former record holder created by IBM, by offering a form factor roughly 1/10 of the size of the super small IBM computer. As you can see from the image above a grain of rice seems huge next to the tiny computer.

Back into 2014 the same research team from the University of Michigan created a tiny computer measuring just 2 x 2 x 4mm called the Michigan Micro Mote. But were then beaten by IBM developers who created an even smaller computer measuring just 1mm x 1mm using “several hundred thousand” transistors. Now the team has bounced back again and created an even smaller computer. More details on the tiny computer jump over to the official press release on the University of Michigan website by following the link below.

“We are not sure if they should be called computers or not,” said David Blaauw, a professor of electrical and computer engineering, who led the development of the new system, in a press release. “It’s more of a matter of opinion whether they have the minimum functionality required.”