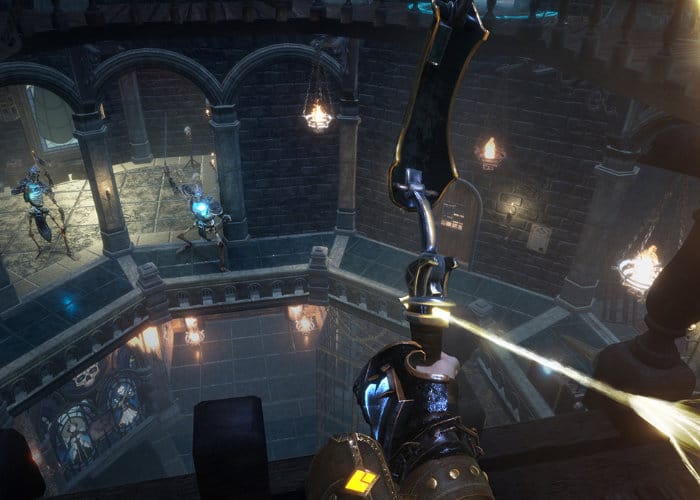 Virtual reality gamers searching for a new sword and sorcery VR adventure may be interested to know that Daily Magic Productions will be launching their new Witching Tower VR game next month during October. Geared up to land on Steam, Oculus Store and Vieport on October 4th 2018 the new adventure offers melee combat using a variety of different weapons, archery combat and puzzles.

Watch the official announcement trailer below to learn more about what you can expect from the new VR adventure which is also expected to sometime in the near future launch on the PlayStation VR platform.

“Witching Tower is the VR Action Adventure game set in a dark fantasy world. Adventure through each level of the Tower; having its own history and individual quirks. Brace yourself for a unparalleled experience enhanced with breathtaking visuals and environments.”

“Fight your enemies with a powerful blade, fend off their attacks, find out their weaknesses and inflict crushing strikes! Counter your enemies’ attacks and unleash a flurry of devastating blows! Shoot with a bow or throw books – the choice is yours! The first-person action will get your heart racing and your blood pumping!

Explore the Tower and you’ll understand the dangers that invaded the kingdom. But be careful! These dangers will prevent you from reaching the goal and escape from this scary place. Skeletons? Bats? Undead? Oh my! These creatures won’t let you catch a breath!

Facing the Undead? Capture its mind and you’ll be able to make the enemy fight for you. The magical vision will help you to see what is invisible at first glance. And if you show a little ingenuity, the magical lasso will let you dominate your enemies with the environment!”

This is definitely a VR adventure game I’ll be purchasing on October 4th, 2018.