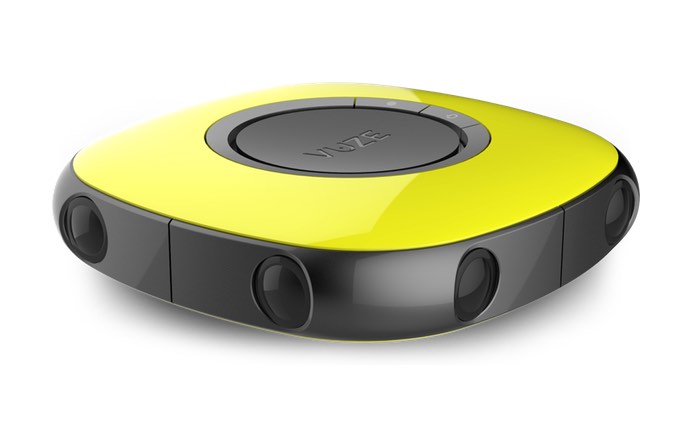 VUZE the world’s first 3D 360 degree Spherical Virtual Reality camera is now available to preorder with prices starting from $799. By pre-ordering you also get a free handy VR kit which includes $120 of accessories, in the form of a tripod VR headset and the useful Vuze App and Vuze Studio.

The VUZE is available in a number of colours including yellow, red, black and blue and measures just 12 x 12 x 3 cm in size and has been specifically designed to capture, watch and share VR footage with ease.

Check out the video below to learn more about this new virtual reality camera which is capable of recording 4K Ultra HD footage and 3D 360 degree virtual reality videos and stills.

The VUZE Camera combines advanced 3D and 2D capture technology using 8 Full HD cameras within an easy-to-use ‘point and shoot’ form-factor generating 4K resolution 360 video. The VUZE Studio brings groundbreaking advances in 360 3D content creation with state-of-the-art stitching thanks to a proprietary technique called Adaptive Blending that mimics the way the human eye interacts with the brain to form pictures in the mind. VUZE content can be viewed and enjoyed on any VR platform, headset or 3D device or TV.

The ZUZE pre-order bundle includes the VUZE Camera and software studio, VR headset, purposely engineered ‘selfie stick’ and tripod, stylish carrying case and a newly designed handle for alternative ways to hold the device. Pre-orders begin May 12, 2016 with shipping in the fall of 2016. While people need to register a pre-order to secure this price and guarantee their place among the first to receive VUZE, no payments will be taken until shipping.

For more information on the new VUZE 3D camera jump over to the official website for details following the link below.