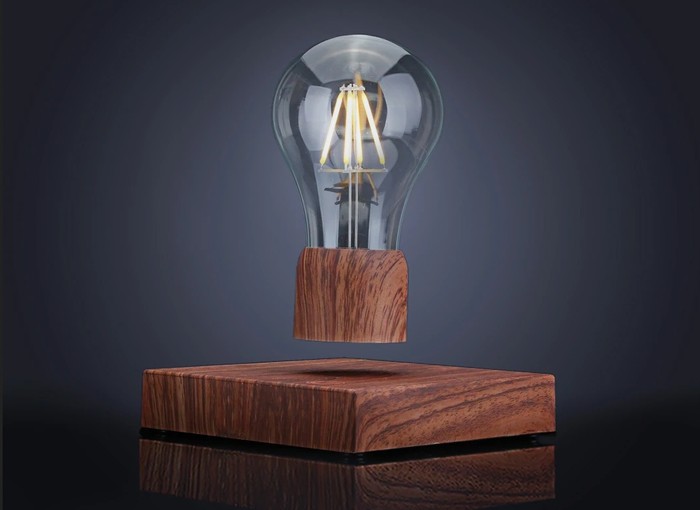 Volta is a unique levitating light bulb lamp which combines both science and design to create an elegant, mystifying LED light that literally floats in midair. Volta is named after the Italian physicist, Alessandro Volta, a pioneer of electricity and power, and credited as the inventor of the electric battery. Volta is equipped with a wireless power module that allows it to receive just enough electricity through the air to power the LED filament and the bulb is both shatterproof and durable and will last for years to come say its designers.

“VOLTA is a floating light bulb that levitates and spins with elegant grace. Wireless induction technology allows the LED bulb to cast a warm, soothing light while being suspended in mid-air. Volta was built to last. Its reinforced shatterproof bulb is protected against breaks and cracks, and its contact wires are 10 times stronger than those in the average lightbulb.”

“While most light bulbs are fixed to a socket, VOLTA is powered through magnets and the air by induction, allowing you to illuminate your home and stand out with this awe-inspiring floating lamp. Suspended in the air with almost no friction, its gentle rotating effect will keep you mesmerized in peaceful state of mind for hours.”

“VOLTA has a wireless power module that is capable of transmitting just enough power to light the bulb up completely, but don’t worry about the electricity bill skyrocketing because it is a low power light bulb that uses energy-efficient LEDs. You can also turn off the light but keep it floating 24/7.”