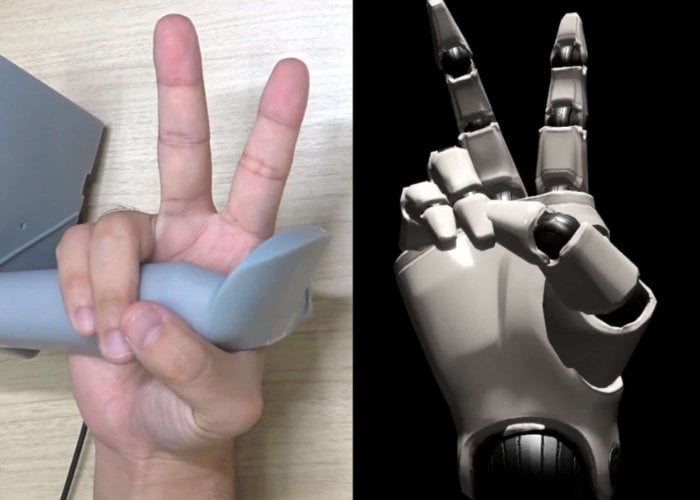 Sony has released a video demonstrating their next generation virtual reality finger tracking controllers which are currently under development. The video accompanies a new research paper titled ‘Evaluation of Machine Learning Techniques for Hand Pose Estimation on Handheld Device with Proximity Sensor’ reports the UploadVR website.

“Tracking finger movement for natural interaction using hand is commonly studied. For vision-based implementations of finger tracking in virtual reality (VR) application, finger movement is occluded by a handheld device which is necessary for auxiliary input, thus tracking finger movement using cameras is still challenging. Finger tracking controllers using capacitive proximity sensors on the surface are starting to appear. However, research on estimating articulated hand pose from curved capacitance sensing electrodes is still immature. Therefore, we built a prototype with 62 electrodes and recorded training datasets using an optical tracking system. We have introduced 2.5D representation to apply convolutional neural network methods on a capacitive image of the curved surface, and two types of network architectures based on recent achievements in the computer vision field were evaluated with our dataset. We also implemented real-time interactive applications using the prototype and demonstrated the possibility of intuitive interaction using fingers in VR applications.”

Unfortunately no information on availability or pricing has been revealed by Sony at the current time but as soon as more information becomes available we will keep you up to speed as always.