I think we can all be honest in the fact that some of our Facebook friends post entirely too many pictures of their kids. Each time you log on you may not want to see new close-up pictures of that new born, questionably attractive baby that your friend from high school recently had. If you’re on Chrome there’s a new plug-in that will take all those baby pictures and replace them with photos of something else. 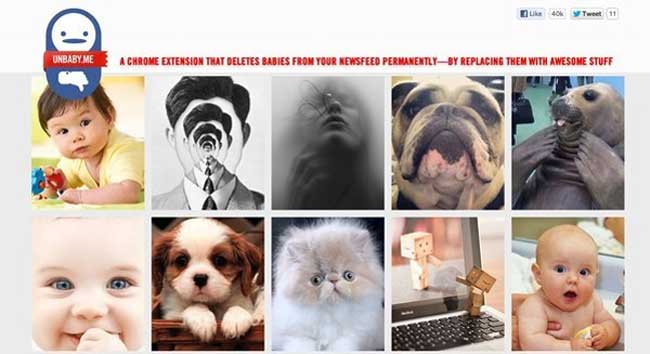 The Chrome plug-in is called Unbaby.me and one potential downside is that it only knows if a photograph in your newsfeed is a baby photo based on keywords the picture is tagged with. It looks for keywords such as cute, adorable, and first birthday.

When a photograph tagged those keywords is found, it replaces them with another photo from an RSS feed. The default RSS feed is cats. I’m not sure how useful replacing baby photos with cats would be because people posting pictures of their pets get almost as annoying as people who post pictures of babies constantly.