A new single board mini PC which is a cross between a Raspberry Pi and Arduino board, has been unveiled this week in the form of the new UDOO mini PC.

The UDOO mini PC is a single-board Arduino-compatible computer equipped with a faster processor than is currently provided by the Raspberry Pi mini PC and comes with support for both Android and Linux operating systems. Watch the video after the jump to learn more about the UDOO mini PC project and see it in action. 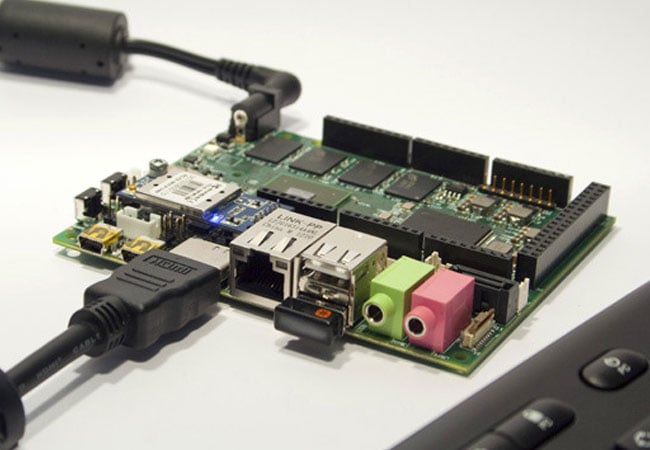 The UDOO mini PC is powered by a Freescale i.MX6 ARM Cortex-A9 processor supported by 1GB of RAM, and is equipped with the same SAM3X8E ARM Cortex-M3 chip as the Arduino Due, and support for any shields that will work with the Arduino Due.

“UDOO is a mini PC that could run either Android or Linux, with an Arduino-compatible board embedded. UDOO is a powerful prototyping board for software development and design, it’s easy to use and with a few steps you can start using it and creating your projects with minimum knowledge.

UDOO merges different computing worlds in one; each world has its strengths and weaknesses, and all of them are useful today in education as well as Do-It-Yourself (DIY) and rapid prototyping endeavours. UDOO is an open hardware, low-cost computer equipped with an ARM i.MX6 Freescale processor for Android and Linux, alongside Arduino DUE’s ARM SAM3X, both CPU integrated on the same board!”

UDOO measure just 11 cm x 8.5 cm and is now available to purchase in two varieties : UDOO DUAL with a i.MX6 dual-core processor for $109 and the UDOO QUAD has an i.MX6 quad-core processor and a SATA connector for $129.