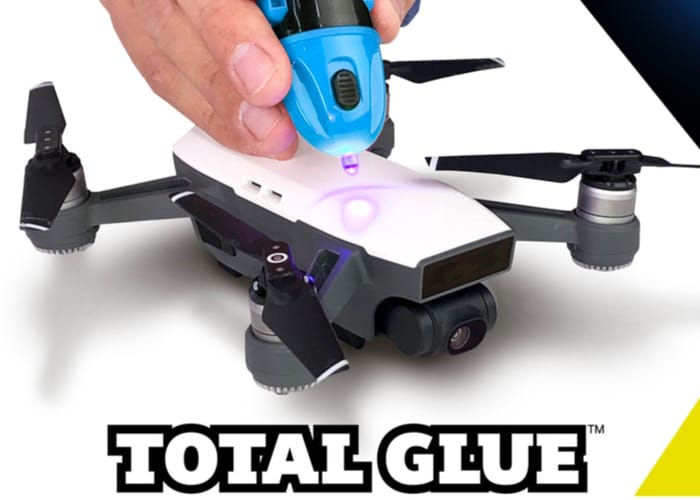 A new adhesive 10 times faster than superglue has been created by FiberFix USA in the form of the aptly named Total Glue. The new adhesive cures at the speed of light and allows you to fill gaps, making clean and precise repairs to almost anything. Watch the demonstration video below to learn more about the light curing adhesive which is this week launched via Kickstarter and already raised over $42,000 thanks to over 1,300 backers.

“Let’s face it: superglue is yesterday’s adhesive. It says it takes 30 seconds to set – yeah right! More like 30 minutes! It gets everywhere you don’t want it to. AND it dries out when you don’t want it to! And if it really is so SUPER…then why do you also need epoxies for gap filling, sealants for cracks and leaks, and glue for specific materials?

“Total Glue is a specially-formulated glue designed to cure instantly when exposed to blue light. Simply apply the glue, shine the included light on the glue, and in 5 seconds it will fully cure! ”

Super early bird pledges are now available from $25 or roughly £19 with worldwide delivery expected to take place during October 2018. Early bird backers benefit from a 16 percent saving off the recommended retail price which will take effect once the crowdfunding campaign comes to an end. For more details, specifications and a full list of all available pledges jump over to Kickstarter via the link below.