Imagine having to look at one of these creations as they sit on your fingertip. That’s right, fingertip. The picture below isn’t depicting a giant person with an origami sculpture on their giant fingertip. It’s an almost beyond minuscule work of art the eye would strain to see. The important thing to know regarding these excruciatingly small origami creatures (they’re shaped like animals, dragons, snowflakes, etc.) is the artist: Anja Markiewicz. 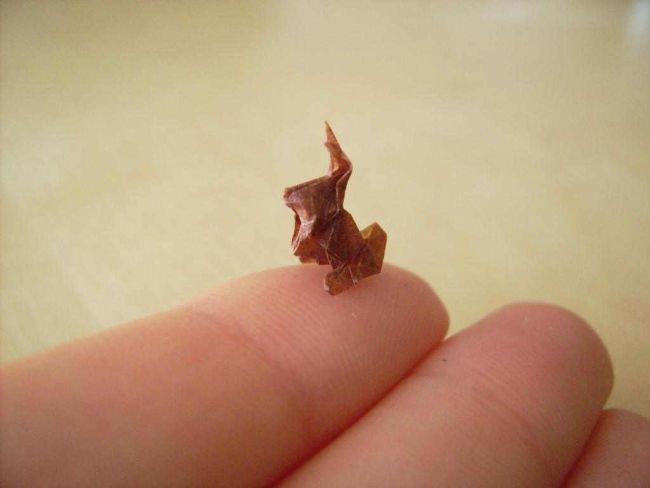 Anja Markiewicz has a jam-packed Flickr account full of her tiny creations and thinking of how she made each gives us a headache. The paper artist usually works with a square inch of material and no doubt she uses a lot of fine tweezers folding them according to her desires. If she used her fingers though, loads of respect to her.

Being an avid origami artist is one impressive skill to have. Origami, for some reason or other, has also figured in a lot of sci-fi films. The best we can think of is the 1990 cult classic Robot Jox. ‘Twas a film so ludicrous it became awesome. imagine giant fighting robots in epic battle sequences before there was CGI.

Back to Anja, her work might not be the perfect origami fold but her skill is worthy of a watchmaker. So don’t forget to appreciate Anja’s work and watch Robot Jox. “We can both live!”