Aluminum AND carbon fiber. Survival rifles aren’t really that exciting anymore. Often found in emergency kits for downed airmen who might be trapped in the hostile outdoors; the compact weapons are designed with ultimate simplicity in mind. No surprise then that the latest from Mountain View Machine & Welding, the Pack Rifle,  barely manages a handful of parts. Even better, it’s convertible. 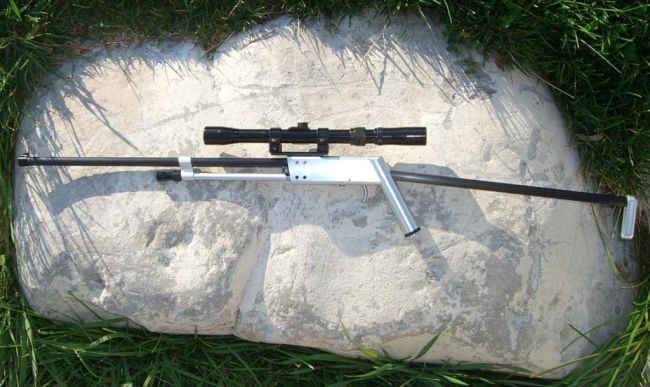 That’s convertible to a fishing rod, of course. It’s for those occasions when shooting them fishes doesn’t seem like a good idea. The great fishing rod switcharoo happens via a re-assembly of the receiver. There’s even a detachable reel for the pistol grip, which can be extended.

The single shot rifle is designed in such a way that assembly takes less than a minute. It’s a single shot, bolt action affair that might not take down a grizly but could score small animal dinner.

The bad news is this otherwise attractive gadget will cost the enthusiastic buyer a whopping $425. The bullets are .22 caliber, which is good enough for small game but might be useless if you’re planning to pull off a Lee Harvey Oswald.