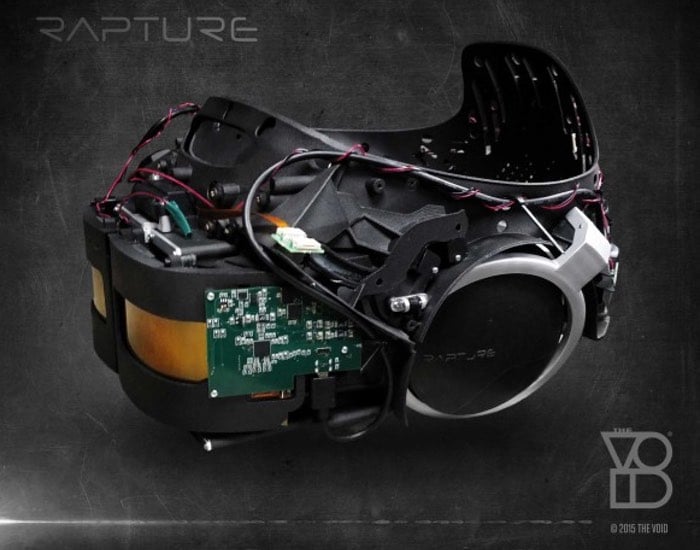 An early prototype headset has been unveiled this week, that is currently under development for The Void virtual reality attraction which is set to open its doors to the public sometime next year.

Unlike other virtual reality headsets the first version of ‘Rapture’ is equipped with curved OLED displays and is being constructed to help The Void fuse together both the physical and virtual worlds to immerse visitors in a completely new VR experience.

Ken Bretschneider the founder of The Void experience, has been reportedly contributed $250,000 of his own cash into the development of the Rapture VR headset. Watch the video below to learn more, the Road to VR website explains :

The Void’s custom tracking system being tacked onto the player’s backtop-powered experience whilst the company worked quietly on perhaps one of their biggest selling points: a custom designed and built VR headset which aims to deliver what the company hopes will be a superior VR experience. It’s called Rapture and the company behind the new hardware has released the first image of a working prototype, in all its naked glory.

This hardware is still in prototype form as The Void team continues to create its ambitious inaugural VR attraction based in Salt Lake City, Utah, due to open at some point in 2016. No precise dates on when you’ll be able to book your first date with the Rapture VR headset, but we can’t wait to get a taste of a VR backed by hardware built without the restrictions of consumer pricing.

For more details jump over to the The Void official website via the link below.