Tesla Motors showed off their battery pack-swapping process earlier this week to show how recharging an electric vehicle could take less time than filling a gas tank. Elon Musk, the founder of Tesla Motors, put the process to the test against what he claimed was the fastest pump in LA. Battery-swapping took only 90 seconds, while refueling took more than 150 seconds.

Tesla Model S owners will be able to switch batteries without ever leaving their cars for what Musk said would cost the same as a tank of gas. Tesla won’t require you to pay for the swap right away either. You can choose to take the old battery with you or not, and then Tesla will charge you the difference later. 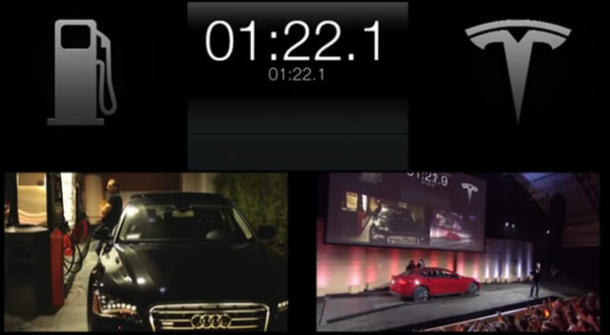 To recap. You’ll be able to swap batteries in the Model S instead of waiting for the battery to recharge as a way to instantly car your car. It takes less time than refueling a gas tank, costs the same, and you’re charged later instead of right away.

The major issue is the installation. One pack-swapping station costs $500,000 to build. Tesla Motors is already getting to work on that though. The first stations are set to pop up on I-5 in California.

With the Tesla becoming more affordable and the new battery-swapping service being what it is, do you think electric vehicles are finally coming into the fold as viable alternatives to gasoline-fueled transportation?