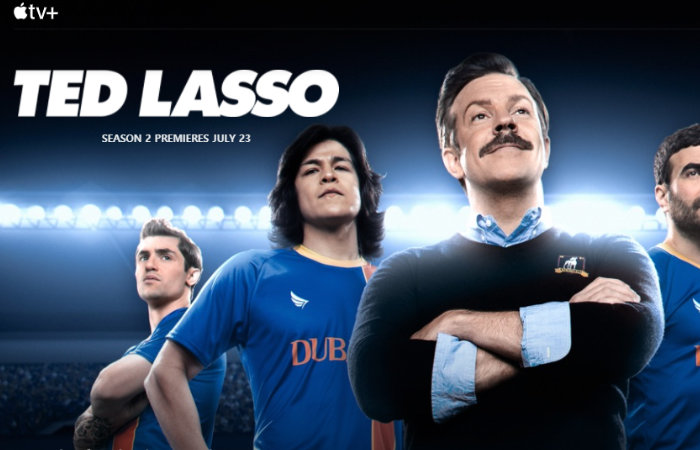 Apple has confirmed that Ted Lasso season two will be premiering on the Apple TV+ streaming service from July 23rd 2021 onwards. A new trailer has been released providing a glimpse at what you can expect from the storyline and characters in Ted Lasso S2 which carries on the story from the first and award-winning season which premiered last year. Golden Globe winner Jason Sudeikis is Ted Lasso, an American football coach hired to manage a British soccer team, despite having no experience whatsoever. “But what he lacks in knowledge, he makes up for with optimism, underdog determination…and biscuits”.

“American Ted Lasso, a coach of college-level American football, is unexpectedly recruited to coach an English Premier League team, AFC Richmond, despite having no experience in association football. The series has drawn comparisons to the takeover of Chester City F.C. by American gridiron coach Terry Smith in 1999, who subsequently installed himself as first-team manager. In season 2, the focus will revolve around AFC Richmond’s growth and run through the FA Cup, trying to become the first team from outside the top division in English football to win the cup since West Ham in 1980.”