Way back in 1914s, during the World War 1, a conventional bunch of submarines are typically used by Militaries as a defense measure in attacking the enemies’ ships on sea surfaces. But now, it seems that the traditional watercraft operational machine is now becoming an awesome trending tag to one’s digital play. 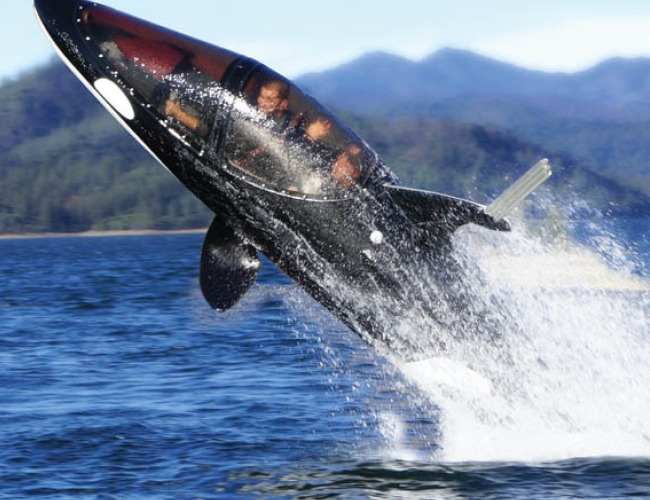 An American electronic retailer named Hammacher Schlemmer, that offers unique gifts and ideas to consumers, came up with a distinctive kind of submarine in the form of a killer whale.

This watercraft is a two-person vessel capable of submerging up to 50 miles per hour over the water’s surface. As well as it can travel up to 25 mph while it was plunged and can reach the depth of 5 feet having enough air supply through the integrated snorkel on its dorsal fin.

The Killer Whale Submarine features a half inch watertight acrylic canopy and control levers in articulating the whale’s pectoral fins for roll and cautious dives. Its 255-hp supercharged Rotax axial flow engine controlled by dual foot pedals can manage the whale’s movements such as sky hopping and porpoising.

The seats are ensured of closed-cell foam upholstery and four-point racing harness for the pilot and passenger’s protection. There is also LCD that plays live video coming from integrated camera on the dorsal fin.

Commonly used gears are included such as tachometer, speedometer, and engine and air pressure gauges. It measures as 17 1/4’ x 3 1/2’ x 4 3/4′ and weighs about 1,450 lbs. The Killer Whale Submarine is priced at $100,000 which is now available on official Hammacher Schlemmer website.