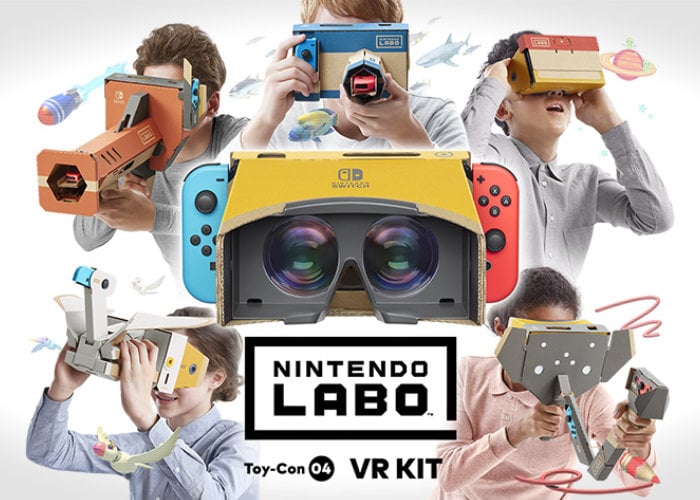 “This new kit builds on the core tenets of Nintendo Labo – Make, Play and Discover – to introduce virtual reality in a way that’s fun and approachable for both kids and kids at heart,” said Doug Bowser, Nintendo of America’s Senior Vice President of Sales and Marketing. “We wanted to design an experience that encourages both virtual and real-world interactions among players through passing around Toy-Con creations.”

– Nintendo Labo: VR Kit: Available at a suggested retail price of $79.99, the complete Nintendo Labo: VR Kit includes the Nintendo Switch software and materials to build all six Toy-Con projects – the Toy-Con VR Goggles, Toy-Con Blaster, Toy-Con Camera, Toy-Con Bird, Toy-Con Wind Pedal and Toy-Con Elephant – as well as a Screen Holder and Safety Cap. It’s a good option for kids and families who want to dive in to the full experience.

– Nintendo Labo: VR Kit – Starter Set + Blaster: Available at a suggested retail price of only $39.99, the Starter Set includes the Nintendo Switch software, plus all the components to build the Toy-Con VR Goggles and Toy-Con Blaster, as well as the Screen Holder and Safety Cap. The Starter Set is a great entry point into the world of Nintendo Labo VR.

Players that own the Starter Set can purchase the following optional expansion sets to expand their experience:

**The two expansion sets do not include the Toy-Con VR Goggles or Nintendo Labo: VR Kit software.

More details on all the new virtual reality Nintendo Switch Labo VR kit creations jump over to the official Nintendo website by following the link below.