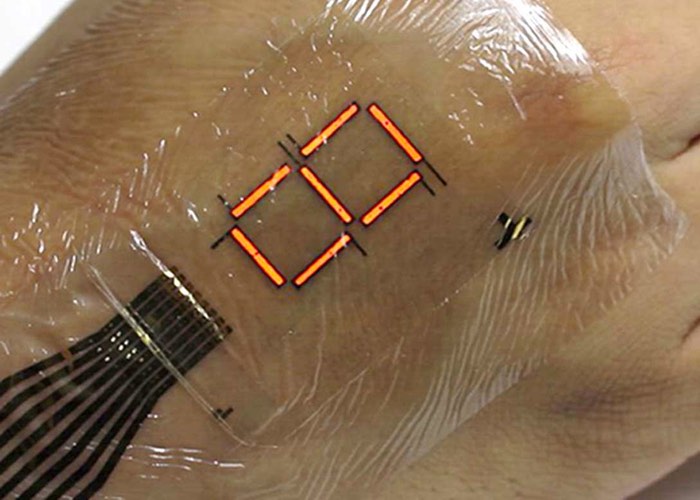 As wearables become more and more popular the technology behind them will advance and before long implants into your body are sure to be an everyday occurrence. One new development in this area is a super thin LED which allows users to be able to wear a screen directly on their skin.

The super thin LED has been created by researchers at the University of Tokyo and takes the form of an optoelectronic skin and is constructed from polymer LEDs and organic photodetectors and measures just 3 micrometers in thickness enabling it to be laminated on to human skin.

Check out the video below to learn more about this super thin digital display that turns your skin into a screen. The New Scientist website explains a little more :

Similar e-skins have been made before, but at just 3 micrometres thick this is the thinnest yet. It is also more durable. Made by Takao Someya at the University of Tokyo and his team, the e-skin can be laid over actual skin anywhere on the body. Looking like a layer of plastic food wrap, it is flexible enough not to break when you move.

Connected up to sensors on the body, the e-skin has been used to display a person’s pulse and blood oxygen concentration on their hand. This could be used by people in hospital, for example – or athletes while they are training. But Someya sees a wider range of uses. “A worker will be able to have building plans or an electrical diagram displayed on their skin without carrying heavy devices,” he says.