GoPro action camera owners that are sometimes disappointed with the shake and vibrations captured in their footage created as they engage in their favourite action sports activity, without a GoPro stabiliser mount.

Might be interested in a new GoPro stabiliser mount called the Stubilizer which has been created by Stuart Smith and RockSolid Technologies to help provide smoother more professional video footage when using your GoPro action camera to record your adventures. 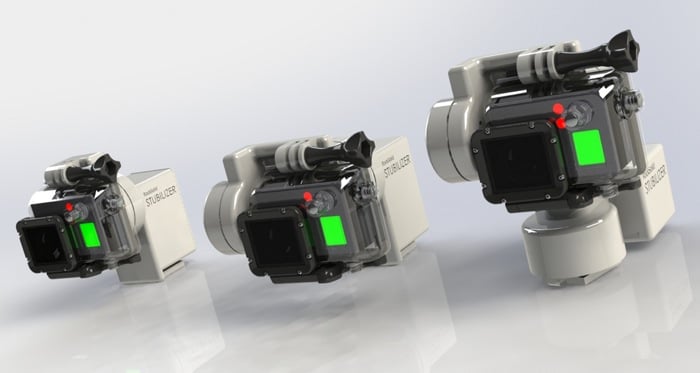 Stubilizers have been specifically developed to be compatible with a range of GoPro action cameras and currently support the GoPRo HD, HD2, 3 and 3+ cameras. The Stubilizer unit is self contained and includes a built in GoPro compatible mount. Check out the video below to learn more about the features of the new Stubilizer GoPro stabiliser mount.

The Stubilizer is available in three different versions and offers a GoPro stabiliser mount for every need and budget.

“The Solo is great for activities that only really require stabilization in the roll axis. The Duo comes with a rotary adjustment, which lets you adjust the camera pitch at any time. Once adjusted it will maintain that pitch until you change it.

The Pro adds a stabilized yaw (heading) axis to the other two stabilized axes. Only consider the Pro if you are completely sure you need the Yaw/heading smoothing. Itcan give the most stable and smooth footage of the range, but only if you are prepared to accept the limitations that the 3 axis design imposes.”

The Stubilizer GoPro stabiliser mount project is currently over on the Kickstarter crowd funding website looking to raise enough pledges to make the jump from concept to production.

So if you think Stubilizer is something you could benefit from, visit the Kickstarter website now to make a pledge and help Stubilizer become a reality.