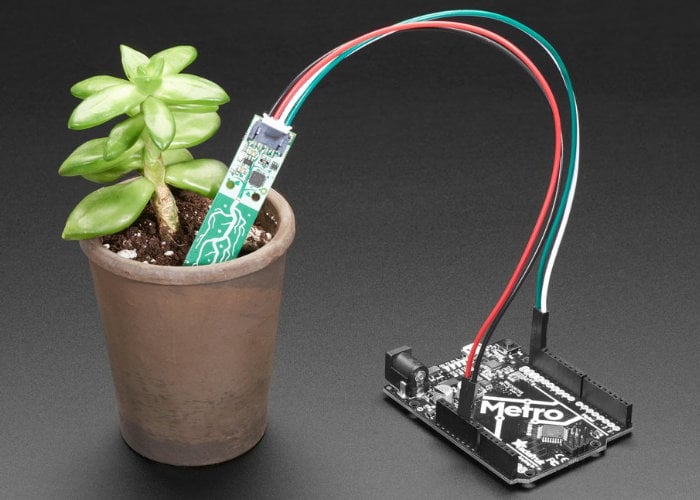 Makers might be interested to know that Adafruit is now stocking a new STEMMA capacitive soil moisture sensor which provides superior enhancements when compared with resistive style soil moisture sensors. Adafruit explains a little more about the differences between the two and why  the STEMMA Soil Sensor is a superior piece of kit and offers more accurate readings and data collection.

“Most low cost soil sensors are resistive style, where there’s two prongs and the sensor measures the conductivity between the two. These work OK at first, but eventually start to oxidize because of the exposed metal. Even if they’re gold plated! The resistivity measurement goes up and up, so you constantly have to re-calibrate your code. Also, resistive measurements don’t always work in loose soil.

This design is superior with a capacitive measurement. Capacitive measurements use only one probe, don’t have any exposed metal, and don’t introduce any DC currents into your plants. We use the built in capacitive touch measurement system built into the ATSAMD10 chip, which will give you a reading ranging from about 200 (very dry) to 2000 (very wet). As a bonus, we also give you the ambient temperature from the internal temperature sensor on the microcontroller, it’s not high precision, maybe good to + or – 2 degrees Celsius.”

Jump over to the official Adafruit online store for full details and to purchase your very own for $7.50