SteelSeries has unveiled a pair of new backlit gaming keyboards at CES 2013 Consumer Electronics Show in Vegas this week in the form of the SteelSeries Apex and Apex [RAW].

SteelSeries has equipped both gaming keyboards with raised programmable macro keys along the top and left side, allowing for easier and more precise macro combinations. 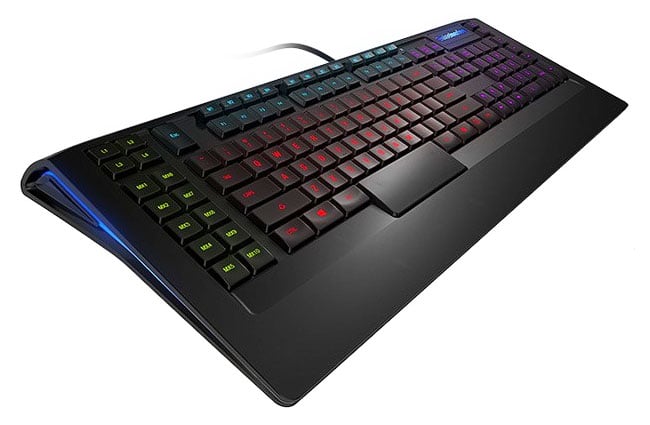 Other features include an enlarged space bar, two small tactile bumps on the W-key to provide a faster return to WASD, together with anti-ghosting support allowing up to 20 simultaneous key presses at any time, for even the largest macro combinations.

“We’re introducing a range of new gaming functionality with the Apex keyboards, including the new SteelSeries ActiveZone which allows for easier and faster access to advanced customization and features than ever before, ” said Bruce Hawver, SteelSeries CEO. “The SteelSeries Apex and Apex [RAW] have been designed to enable users to react quickly, move strategically, and adapt how these keyboards perform for every game.”

The keyboards are also equipped with feet that allow the angle to be adjusted and the SteelSeries Apex supporting 16.8 million colours backlit effects will retail for $99.99 while the Apex [RAW] will be priced at $69.99 with just a white backlight and eight levels of intensity, with shipping starting for both in early Q2 2013.