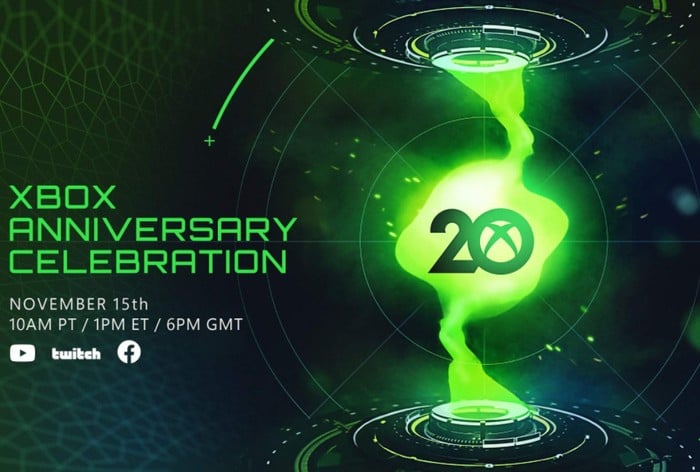 Xbox gamers interested in participating in the 20th Xbox anniversary event taking place on November 15th at 10 AM PT or 1 PM ET or 6 PM GMT time, will be pleased to know that Will Tuttle, Xbox Wire Editor in Chief has revealed more details about the event over on the official Xbox new site. Microsoft has also created a special trivia event to celebrate 20 years of Xbox and to test your Xbox knowledge.

The special trivia event takes place on Saturday, November 13 at 2:00 p.m. PT or 5:00 p.m. ET or 10:00 p.m. GMT depending on your location. To attend, log in or sign up as an Xbox FanFest fan at xbox.com/FanFest and opt-in to the event on the FanFest Exclusives page. Opt-in closes at 11:59 p.m. PT on November 9, 2021. There will also be plenty of 20th Anniversary Xbox Gear available on November 15 from the official Xbox Gear Shop as well as membership badges and more.

“Do you remember where you were when you played your first Xbox game? It may be hard to believe, but this year will mark the 20th anniversary of Xbox. I’m proud to have been a member of Team Xbox for 17 of those 20 years! The original Xbox console was released in North America on November 15, 2001, followed by many more launches all around the world including Japan, Australia, Europe, Latin America, China, and more!

Twenty years ago, playing on Xbox meant hooking up your console with three (or more!) cables to a standard definition CRT TV. You had to pre-order the hottest new games and stand in line at your favorite retail shop to pick them up. Games were played in 640×480 resolution, and you only had 8GB of storage and 64MB of memory to enjoy them with. And you either played alone or with a friend sitting next to you on the couch.

The Xbox experience today, as shaped by you, is wildly different. You can now jump into your favorite games on your Xbox Series X|S console (imagine showing your past self a 4K HDR game!), on PC, or on mobile*. You and your friends can play with and against the more than 100 million players who log into Xbox every month from around the world. And there’s no more convincing every person in the group to go out and buy a big game. If you all have Xbox Game Pass Ultimate, you can pick the destination from a variety of games in the catalog and just start playing. We love this gaming future.”