Sparrow has today rolled out a new update to their awesome mail application for iPhone, taking it to release Sparrow 1.2. Unfortunately for those of you waiting for Push mail to be added to the app, this update doesn’t include this feature. As apparently Apple will not make any exceptions despite the strong demand for the feature. 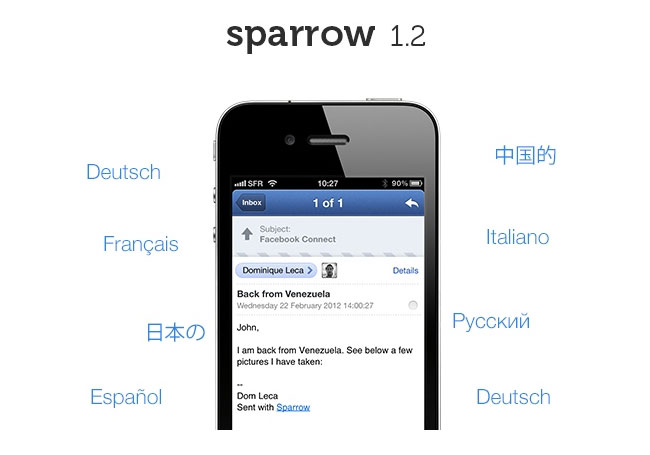 New features within the latest release include new message navigation by swiping up and down, the ability to edit and create folder/labels, landscape composing and support for 9 languages. Including English, French, German, Spanish, Italian, Japanese, Dutch, Russian, and Chinese.

Sparrow explains about Apple’s decision on the Push features:

“You were more than 16 000 helping us on our Apple quest to get the VoIP privilege. We can’t thank you enough for your support. Unfortunately, Apple has confirmed that they are not willing to do any exception to the rule and that Sparrow will NOT be granted with the privilege.”

The latest Sparrow 1.2 version for iPhones is available to download from the iTunes app store and Sparrow version 1.6 for Mac is arriving soon says Sparrow.