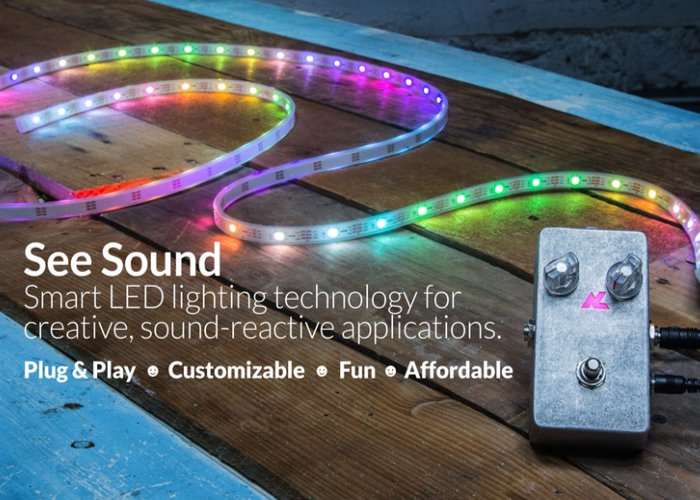 Musicians, developers or hobbyists looking to transform sound into light may be interested in a new piece of hardware which is being created by Audiolux Devices, aptly named the Audiolux One.

The Audiolux One takes the form of a smart LED system that allows users to easily create sound reactive visuals, Using a plug and play stompbox that analyses audio in real time to generate the music visuals using smart LED pixels.

Watch the demonstration video below to learn more about the Audiolux One smart LED system which is launched by Kickstarter this week to raise the $30,000 it requires to go into production.

Audiolux Devices are a new generation of LED lighting hardware that intelligently translates sound and music into light, color and movement. The technology is designed for musicians, producers and event professionals to easily install LEDs anywhere to create plug-and-play sound-reactive visualizations. No computers, software or complex programming is required.

Plug in any audio source and algorithms translate frequency and amplitude information into light color and movement providing a detailed and immersive visual representation of sound. All-metal construction and high quality components which means Audiolux Devices are durable, robust and easily-serviced. The ‘stompbox’ form factor is instantly familiar to musicians, providing a stand-alone, user-friendly way to set-up without needing an external device or app.

Audiolux One is now available to back via Kickstarter with early bird pledges starting from $299 and delivery expected to take place during November 2017. For full specifications and more information jump over to the official Kickstarter campaign page via the link below.