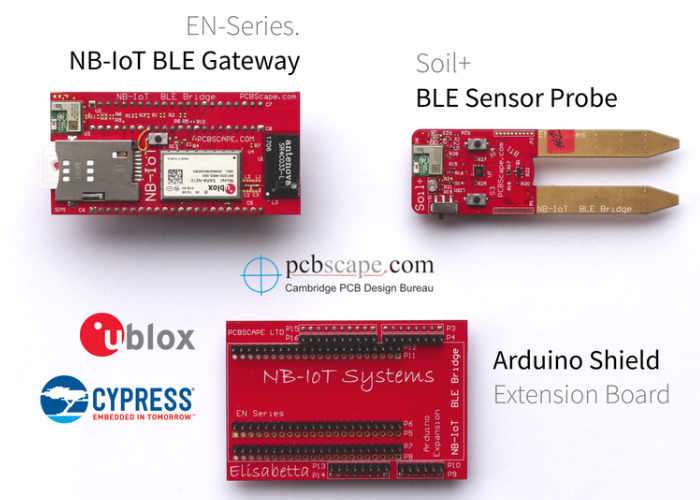 A new Kickstarter campaign has been launched this week by Richard Seymour to raise the funds he requires to create a NB-IoT BLE Gateway and Soil Sensor.

Using an Arduino shield extension board together with a NB-IoT BLE Gateway and BLE Sensor Probe the open source system allows you to connect to 25 or more soil sensors sending data over Vodafone’s NarrowBand-IoT (NB-IoT) network to the cloud.

Allowing you to monitor crops and soil conditions with ease. Richard explains more about the inspiration behind the project and his plans going forward.

This is quite simply a BLE (Bluetooth Low Energy) gateway that intermittently reads data – soil moisture level, ambient temperature, humidity and light level – from up to 25 Soil+ sensors. It then sends this data over Vodafone’s NarrowBand-IoT (NB-IoT) network to the cloud. Before sending though, if connected as an Arduino shield or to a serial terminal via USB, this data can be read, processed, and then sent out manually via AT commands!

Six months ago we started this project with a vision. It began by talking about what we wanted to achieve.We were excited by the possibilities an increasingly interconnected future will bring, and we wanted to put our design and development skills to use to help people achieve these possibilities. We also wanted to create a simple, hackable and refactorable platform for people to learn and implement the technologies to create our interconnected future. We value open and participatory innovation and education and wanted to release something to benefit the open source community. The culmination of these reflections saw the birth of this project.

For more details and to make a pledge from £75 for a single soil sensor and gateway jump over to the official Kickstarter crowdfunding webpage by following the link below.