Not killed in the sense that it’s destroyed, but killed as in the person wakes up and turns it off. Such is the genius of this WiFi-enabled gadget from ThinkGeek. In case you’re still wondering about the name, it’s a corrupted for of Snooze and Lose. People who actually buy this must be afflicted by an extreme case of attraction to beds. 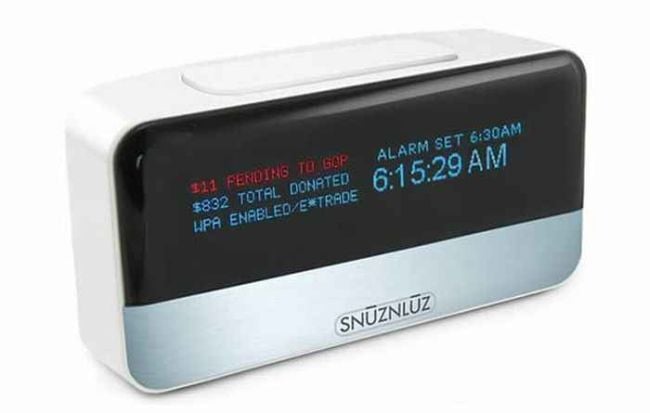 The SnuzNLuz works by configuring it with an online account (yours) through a PC-connectable jack or WiFi. From then on, the SnuzNLuz operates like a normal alarm clock until it rings its infernal alarm. Ignoring its cries brings forth its wrath: Small amounts of your money get automatically donated to an NGO you don’t care about. Pretty terrible, considering that NGOs are usually associated with certain groups that are just sitting on piles of money, using the excess funds for a few small projects somewhere. Should your hard earned cash go to them?

While this method will likely upset a lot of people, we believe nobody is sane enough to actually invest in a SnuzNLuz. Unless of course, the person is a chronic late waker-upper. The SnuzNLuz might then come in handy as a motivational tool to overcome the sluggishness.

The SnuNLuz is currently selling for $39.99. Not bad for the havoc and fear it would cause.