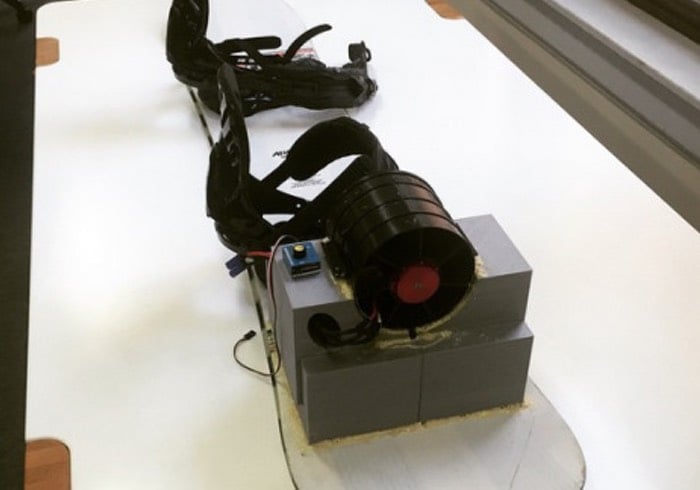 Snowboarders that would sometimes prefer to be able to continue snowboarding whilst on flat ground or up small gradients or even add a little extra speed to their turns, may be interested in a new snowboard jet propulsion system that has been created by Jude Gomila.

The snowboard jet propulsion system is capable of providing a maximum thrust of 22lbs and offers 120amps at 50V with a maximum capability of 600 watts. Watch the videos below to see the concept in action as it is being developed.

“The design is pretty simple and allows for a battery to be placed at the front with enough support to hold around 22lbs of thrust from the jet. I used Tinkercad to create the model. Mostly by eye and using my memory of the board dimensions for measurement.” says Gomila. “There is a small hole carved out for the electronic speed controller.”-“Essentially, to power this beast up, you need some serious battery power and a decent electronic speed control,”

In the future a few more tweaks are hoped to be made to the snowboard jet propulsion system including :

– Addition of a flexible layer between the mount and the board to allow easier turning and keep the mount connected to the board
– A sliding connector for easy removal of mount
– Additional waterproofing
– Addition of finger guards and safety
– Better calibration of the wireless controller
– Safety cut-off switch
– Switching to gas jet turbine with 55 lbs. of force for uphill rides, and more safety

For more information on the new snowboard jet propulsion system jump over to the Jude Gomila website for details.